Working through my “lost cities” list, I’ve revisited Minden in search of the tracks of my mother’s railway grandfather – he became station master of the Mindener Kreisbahnen (district railways) in 1914 and as such was accommodated in a company flat. I found that house, even though his railway station has since disappeared.

So the Mindener Kreisbahnen opened its first route in 1898, from Minden to Uchte, some 30 km in narrow-gauge (one metre instead of the usual 1.4 metres). Further bits were built and opened in 1903 and 1907, all in narrow gauge. Most of the network is on the left bank of the river Weser, where the town centre of Minden is too. Of note, though, the long distance railway station, a crucial node of the 19th century network and the terminus of one of the earliest long distance routes to be completed, Cologne-Minden, is on the right bank. The Kreisbahn built its own bridge across the Weser, still with narrow gauge, to connect with the national network, but its system incompatibility with the national railway system set it up for decades of trouble and misery.

Heinrich Nagel (1879-1952), one of 11 children from an impoverished farming family in nearby Neesen, joined the Kreisbahn before 1902 and became station master of the Minden town station in 1914. Due to this position, he obtained the right to live in a company flat in the house Fischerallee 13, where he stayed until 1950. This sounds very grand but if you look at the location it turns out that the railway tracks, which branch out exactly at this place, cut through the Fischerallee between houses 9 and 13 – so number 11 must have been demolished. Number 13 had a very lucky escape, as only one corner of the building stood in the way of the railway tracks. The company clearly bought up the property in the course of their track preparations, then noticed that knocking off the edge sufficed and didn’t make the house collapse, so they might as well keep it for courtesy flats with a unique and spectacular view across the tracks.

Incidentally, I owe my existence to this flat, as my grandparents only met because a colleague of his was lodging with her parents, in this very house. If the Kreisbahn had decided to knock down number 13 as well, you’d be staring at an empty page right now. (Sorry, I do know I use this line too often.)

The house, still with the corner bitten off (evidence that it wasn't destroyed in the war), appears to have been renovated quite recently, and looks quite lovely: 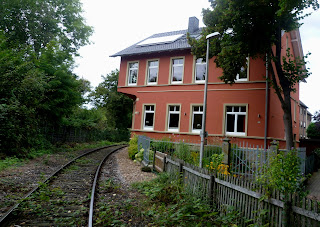 In 1950, Heinrich Nagel and his second wife (the first one, mother of Frieda the pianist, died young after a tooth infection) moved to number 11A, which was between the branching rail lines and perhaps built to replace number 11 when it was demolished. I couldn’t find any trace of it, but this is what it looked like (with two family members peeping out of the windows): 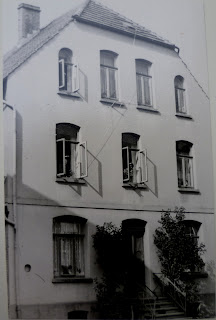 And here is the view from a window of number 11A towards number 13, which clearly marks its location between the diverging tracks. I’m quite sure that place didn’t have a house on it when I visited, although I only discovered this photo after my return, so no guarantee. Also, I have a very vague feeling I may remember these branching railway tracks from my visits as a young child, maybe even the house with the cut-off. Not sure. 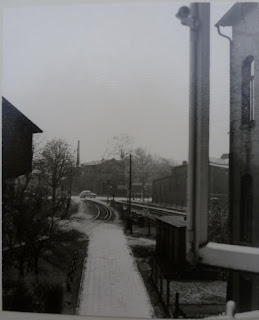 I could find no trace of the Minden Stadt station either, although the street running alongside the tracks on the other side is named after it. As an approximation, there is another small station one kilometre down the line, called Minden Oberstadt, which looks like this: 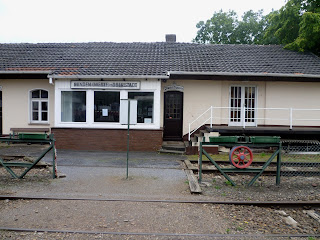 There are actually museum trains running from that station every once in a while, find their events here.

Oh, and here's the old railway man with his second wife, outside Fischerallee 13 (clearly identified by the horizontal bars running underneath the windows): 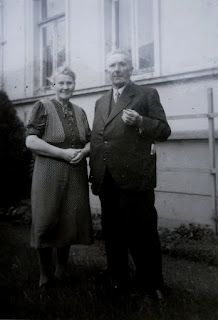 Legend has it that he objected to the Nazis mainly on the grounds that he wanted the monarchy back and that this may have cost him further promotion - but he was in the late stage of his career anyway so didn't lose much and reached regular retirement before the "1000 years" were over.

PS for clarification - Not to be confused with these two railway men, the grandfathers of my paternal grandparents:
* Christoph Gottlieb Kauer, the station master of Adamsweiler (my grandmother's grandfather)
* the railways office clerk in Tangermünde (my grandfather's grandfather, both called Richard) - will write more about his little bit of railway history soon.

Also, Heinrich Nagel's father-in-law appears to have been a manual worker with the railways at Gütersloh (on the main line Cologne-Minden, incidentally), but we don't know much about him. He appears to have died long before his daughter married Heinrich Nagel. That's Johann Anton Lütkemeyer (1843- before 1889), from Schwaney. I should do a blogpost about him at some point, although there will be more questions than answers in it.

So, all in all, there are four railway men in four different branches of the family tree, who very likely never met each other. Apart from Heinrich Nagel knowing about the already deceased father of his first wife, they would not even have known of each other's existence. Still, there are some intriguing parallels to study, for instance, the two station masters both felt the urge to invest in an encyclopedia once they reached this (modestly) elevated status. The two youngest of them produced a relatively small set of children (considering the times), each including a professional musician: Heinrich the hoboist (and later amateur cellist) only had one sister and Frieda the pianist remained an only child.

Update 15.10.2021: The railway families master post is now online. More photos from my visit to Minden now on my flickr photostream, here.