Last week I visited Tangermünde and Stendal for the first time (they were behind the iron curtain for most of the time I lived in Germany). This is where Heinrich the cellist grew up in the 1880s to 90s, because his father Richard the railway man worked on the new branch line linking Tangermünde and its sugar factory to the main line (Berlin-Hannover) passing through Stendal.

In Tangermünde tourist office I discovered a book with old photos of the town, including this one, with the entire staff of the branch line posing outside Tangermünde station in 1889: 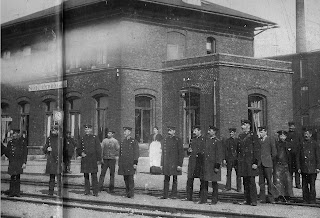 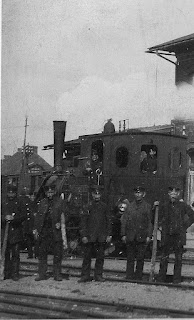 Source: Joachim Kohlmann, Tangermünde wie es früher war, Wartberg Verlag 1993. (Pretty sure the photo must be out of copyright by now.) NB the photo was bigger than my scanner, and the second bit belongs on the left of the first, but I wanted the bigger one to show up in the previews.

So the big question is, who among these 25 lovely railway people is my greatgreatgrandfather? Previously, I only had one photo of him, which is this family portrait taken on the occasion of Heinrich's engagement to Maria (18.4.1904), who appear on the left On the right we have his sister (Gertrud Gross, who married Robert Goetzky in 1908, when Heinrich married Maria) and half-brother Arthur Reim. 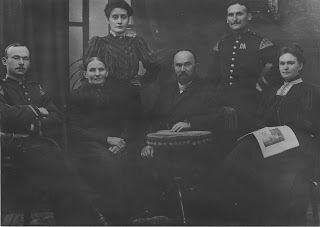 So, anybody up for a game of "Where is Wally?" in the railway picture above? Scroll down to see what I think is the solution.

So, I am quite sure that the guy underneath the clock is our man (I struggled to get a good scan of him as he's too close to the fold between the pages). Compare and contrast: 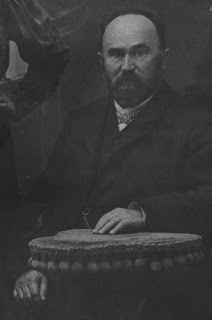 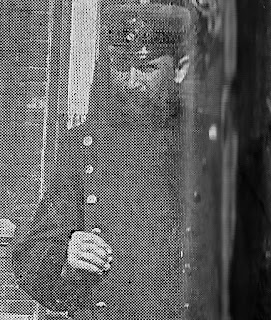 Which I think is a good match. And very exciting as it doubles the number of photos I have of him.

Trying to find more archive photos of this railway line, all I got was shares like this one: 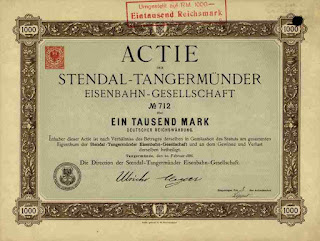 Oh, and I had the pleasure of actually travelling on this very line between the two towns. It is currently operated by a company called Hanseatische Eisenbahn (both towns were in the Hanse, the mediaeval trade union that more famously included Hamburg, Bremen and Lübeck). Photos of my Hanseatic adventures coming soon.

NB Richard the railway man is completely unrelated to this station master whose line in Minden I visited on the same trip.