Finally, to the last and most elusive one of my four railwaymen ancestors (unrelated to each other). He now has a CV of sorts, thanks to a very helpful relative who could fill in a couple of gaps in my info. While the other three had managerial / office roles, this one was an actual railway worker, presumably getting his hands dirty on the job.

Johann Anton Lütkemeyer was born in the small, very catholic town of Schwaney in 1843. The Lütkemeyers and associated families can be traced back in Schwaney until the Thirty Years War, i.e. early 17th century (eg here). While a cousin married into this farm, which remained in Lütkemeyer hands through to the 21th century, Johann Anton moved to Gütersloh to work on the railways there. Opened in 1847, Gütersloh station was a reasonably important stop on the Cologne-Minden line, one of the first long-distance lines to be completed (still in service today - I actually used it last month to get from Düsseldorf to Minden).

In 1872 he married the protestant Johanna Catharina Charlotte Kosfeld (1854-1928) in Gütersloh, and he appears as a railway worker on the marriage certificate. How did he find her? Well Charlotte’s younger brother Carl Wilhelm was also a railway worker, so there may have been some convergence there, although Carl was just under 16 at the time of his sister’s wedding, so any causality may have gone the other way, ie he may have been following his brother-in-law into the railway industry.

The pair had seven children in 12 years. On the birth of the third child, the father’s job title was „Bahnwärter“ i.e. railway guard rather than worker. Sounds a bit less like hard work to me, so well done. At that point, the young family’s address was Gütersloh No. 450. No idea where in the town that was, but might be near her parents who were No. 469.

In October 1887, Johann Anton died of tuberculosis at age 44, leaving his wife with five young children. I’m hoping one of her numerous siblings, such as, eg the railway worker brother, may have helped her out a bit. She remarried a year and a half later, a paver (roadbuilder) from out of town. I was intrigued to learn just now that the paver’s father was a musicus.

My greatgrandmother Luise Lütkemeyer, the fourth child in the railway worker’s family, was seven when the father died. I’m wondering about her perspective on the railway connection, because, after the early loss of the railway guard father, and possibly a period of getting help from her railway worker uncle, she travelled to the end of the line, to Minden, found herself a railway employee (Heinrich Nagel), and married him (see their family portrait here). She was clearly on the right track.

Heinrich Nagel worked on the local railways at Minden, so I don't see a professional reason for him to visit Gütersloh, which is why I credited her with bridging the gap. Luise died in 1928, so there's nobody left who knew her in person and might have heard her railway story. 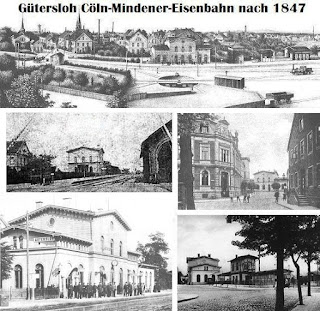 Some 19th century views of Gütersloh station from Wikipedia.

Update 11.10.2021: Fixed my mistranslation of the German job title Pflasterer - although it sounds a lot like plasterer, it's a very different trade and involves setting pavement stones. So I tried paver now.