Let's have some bakers and shopkeepers now to continue the series Every picture tells a story.

The photo shows a baker's shop and family in Dörndorf, Kreis Frankenstein, Schlesien, around 1918. Today the place is known as Powiat Ząbkowicki in Poland. They are Wilhelm Geppert/Göppert (1877-1952), Martha nee Stephan (1887-1968), and their children Hedwig, Emma and Wilhelm Karl. The sign reads in full: "Bäckerei, Mehl- Specerei- Taback u. Cigarren-Handlung, bei Wilhelm Geppert". Meaning that it was a bakery also selling flour, spices, tobacco and cigars. I'm loving the Pipi Longstocking vibe radiated by the oldest, Hedwig, who postumously became my grandmother in law. 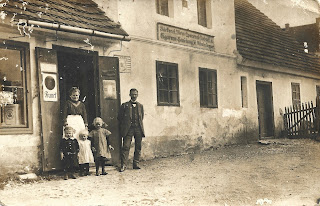 I also shared this photo on flickr earlier this year.