how to become a station master

Two of my four railway ancestors were station masters at very modest stations, so I am on a quest to find out more about their role. First stop, a book meant to help candidates prepare for the exam to become as station master, by J. Wetter, second edition published by Baedeker at Elberfeld in 1889: "Die Prüfung zum Stationsvorsteher und Güterexpedienten, sowie zum Stationsassistenten im Deutschen und insbesondere Preussischen Staats-Eisenbahndienste" Now available at Google Books and in print from forgottenbooks – both use the same scan, which unfortunately has a few pages missing in random places.

By today’s (or even 20th century) expectations, the didactic value of the book is close to zero. The larger part is made up of mock exam questions and suggested answers, quite a few of which can be paraphrased as: Which rules apply to situation X? The applicable rules of the rulebook. I’m exaggerating only slightly. Moreover, some of the information would have been presented much better with the help of graphics, of which there are precisely none. Especially, presenting the geography of Germany and neighbouring countries in text form is a bit silly. The shorter second part is made up of mock exam essays on selected topics, including, hooray, the role of the station master (pp 298-303).

In this chapter and scattered across the rest of the book there are intriguing glimpses at what the station masters did, and what their working lives must have been like. Obviously there were vast amounts of workforce involved in everything. Guards along the tracks, signal operators, brake operators, workers, telegraphists. As this was before the telephone, every station used telegraph to communicate any problems down the line and to regional admin offices.

Passenger accommodation came in four classes. Complimentary travel for station masters was first class, for workers fourth. A station master moving station could claim two waggons for his belongings free of charge. Non-smoking as well as women-only compartments were to be offered in every class. Pipe smokers had to have a lid on their pipes. Children under four travelled free (but couldn’t claim a seat), aged four to ten they paid half price.

There are numerous rules on transporting animals, including horses, livestock, even wild carnivores, and how to label the cage if you ship a tiger or a whole menagerie by rail. I suppose circuses may have used the service back then. In other news, hopefully unrelated, we also get a whole chapter on rules around transporting dead bodies. Rules also for explosives, flammable liquids etc. It almost sounds as though the station masters lived dangerously with all these things travelling in and out of their stations.

There's way too much about book keeping and admin for my tastes, this must have been a nightmare. It's more fun to read about what to do after an accident. One ordinary person dying in circumstances not too spectacular doesn’t call for a big fuss. Any nobility being involved in or near an accident does, however.

The book doesn’t cite many references, but towards the end it mentions several times this “railway geography” by national economist Max Haushofer: 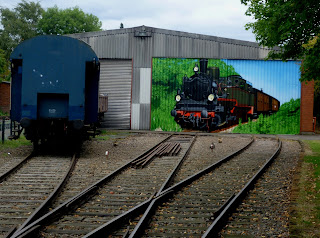 Seen on a recent visit to Minden - sheds at the station Minden Oberstadt, close to Minden Stadtbahnhof which was my greatgrandfather's domain for several decades. (own photo)