Every picture tells a story, No. 9.

Adam Eberle (1863-1938) was born almost exactly a century before me, in the village of Ober-Mumbach in the Odenwald (today in the southernmost tip of the state of Hessen). He did an apprenticeship as a baker, went on the Wanderschaft as far as Metz, on his return married his cousin Anna Barbara Schütz (1860-1934) from nearby Nieder-Liebersbach and set up a bakery in the house Bahnhofstraße 27 in the small but historically important town of Lorsch. (The address doesn't quite make this another railway family, as the road named after the station runs orthogonally to the rail line and number 27 was in fact a few hundred metres away from the station. Passengers wouldn't normally have picked up their bread rolls for the journey at Eberle's bakery.)

The photo from around 1900 shows the house, with Adam, Anna Barbara, and one of the three daughters, probably the oldest, who was also called Anna Barbara, born 1893. 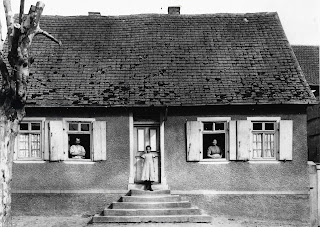 Let's have a zoomed in version too: 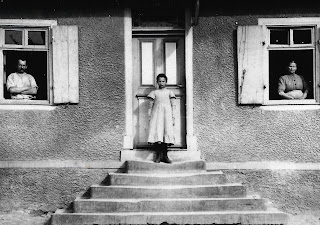 If the mother is pregnant in the photo, this is the last child on the way, Peter, who was born in 1900.

The bakery business wasn't all that successful, but it survived until 1930. Spartan living became a habit in the family. Troubles were sometimes linked to the protestant family from the hinterland not being accepted in the very catholic town. This was also discussed in the context of all three daughters remaining unmarried. However, the latter problem also had to do with World War I. Born in 1893-1897, the young women saw many of their male contemporaries going to war and not coming back.

The daughters kept the house (and the Spartan lifestyle) until 1973, when the last surviving daughter sold it to the town, which had it demolished to build an access road for a school, allegedly. The satellite view right now just shows a car park in the gap between numbers 25 and 29. The only place it could have given access to is the Nibelungenhalle. Anyhow, the baker's house has stayed in the family for over 80 years, which is good going.

UPDATE 13.11.2021 I just discovered a new upload of genealogical data on GedBas that includes our baker Adam Eberle. Although his wife is not named, as they are cousins it is easy to find her parents. Highlights:

An interesting family tree to compare and contrast to this is the maternal side of Grace Kelly - much of it is from the same corner of Germany and linked by names such as Treusch, Griesser, Eberle(in).