Every picture tells a story series.

Two years ago, when I discovered a tape with recordings of Frieda the pianist playing (and also accompanying a singer at the end of the tape), I didn't have any photographic evidence to go with it. Now I found that too. Here she is with the (a) singer in the 1950s: 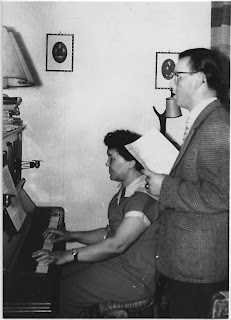 I was only born a year and a half after she died, but I hear that her other grandchildren who were around at the time were banned from the room and spent the time behind the door giggling at that weird kind of singing going on there. I am also told the singer was called Rudi and came for the accompaniment rather than to be taught, although Frieda had studied singing as well, and also sang with Rudi on the recording. I just love the singing lesson as a title for the photo, so I'll leave it there. On the tape, he's singing the aria Reich mir die Hand mein Leben (Là ci darem la mano) from Don Giovanni, which is for baritone.

Of the two photos on the wall, I have the one on the left, showing young Frieda with her parents (the station master of the Mindener Kreisbahnen and his first wife, Luise Lütkemeyer, who had died in 1928, aged only 48): 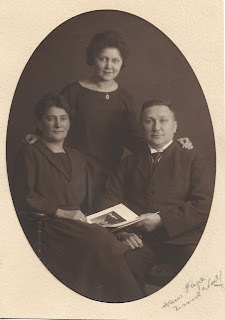 But I don't have the one on the right, presumably her engagement or wedding photo.