refugees on the run

The German place name in the title caught my eye when I came across the book in a charity shop, and further scrutiny revealed that it is loosely based on the author’s family history during World War II, so I read it in the hope of getting a sense of both the places and the family history.

This turned out to be a somewhat misguided expectation. As the characters in the story are refugees on the run in the last days of the war, they have of course lost their homes and large parts of their families. So the thing to learn from it is mostly the dangers of being a refugee (still relevant today), and how to work out who you can trust. And where your next ration of food and drinking water may come from.

It’s not much of a spoiler to say that the train of the title is a red herring (it becomes immediately obvious the first time Kummersdorf is mentioned). Kummersdorf is in Brandenburg, 25 km south of Berlin, so it’s in that general area that the refugees make their way westwards through forests and deserted villages. One of the refugees came from Sternberg (today’s Torzym, Poland, I assume), one from Berlin, and a family from the Giant Mountains in Silesia. That’s about as much geographic reference as we get, which makes sense as these people are literally lost in the woods.

Wilson explains on her website that she wrote the novel for adults at first, but given that the two main protagonists were teenagers, publishers encouraged her to rewrite it as a book for young readers. Which surely made sense commercially, but I would have liked the choice to read the original version.

The website also has some information on the relevant family history, although without specific names and places. See her pages family background as well as reflections on Last train. 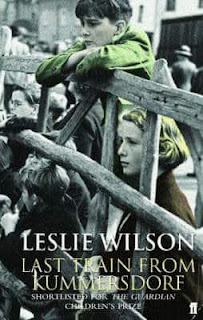