three Hedwigs and a baby

Every picture tells a story No. 32

As I mentioned in episode 22, Hedwig the milkmaid was persuaded into moving in with her in-laws as her husband was conscripted to fight in WW2. Her mother-in-law was also called Hedwig, and I am guessing that the third adult in this pair of pictures may be her youngest daughter, also called Hedwig (or Hede). I may be wrong, but the only other daughter of the family was married by then, and also quite a bit older, so that leaves young Hedwig as the most likely person to still be around.

So there were three Hedwigs in the house, and to make matters worse, all three of them also shared the same last name at that point in time, so all three were called Hedwig Gellrich. In my family history adventures, I always refer to people by their birth name to avoid confusion, so in my nomenclature we have Hedwig Scholz, her daughter Hedwig Gellrich, and her daughter in law, Hedwig Geppert. Much easier.

Here we have first Hedwig senior (and invisible granddaughter) with her daughter (or somebody else) hiding in the open door: 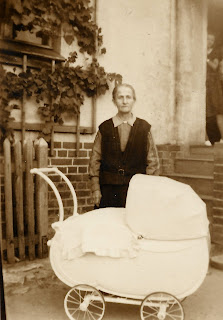 Then the two younger Hedwigs (NB Hedwig Geppert is confirmed, the other one is not) with the baby born 1941: 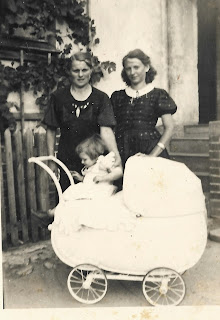 If you look at the leaves of the vine, the pictures were clearly not only taken at the same place but also at the same time.