Every picture tells a story No. 33

Auguste Faust from the East-Prussian patchwork family kept several postcards from male family members serving in World War I. Some made it back, some didn't. I believe her half-brother Adolf Faust did not come back. Although I have no documentation of his death, I have no evidence of his existence after 1918.

Here's a postcard he sent to Auguste in 1916 (she was 18 then), showing him in the middle of his comrades. The names written underneath are: Karl Kottwitz, Adolf Faust, Cr. Lange, Reinh.Beutler, Gr. Golan (?). According to the postal stamp, they were serving with the "9. Kavallerie-Div.", but there is an additional stamp reading: "Jäger-Bataillon Graf York [sic] von Wartenburg, 1. Compagnie", which was part of the 37th division. Not sure which to believe, the English Wiki seems to think Graf Yorck unit only existed until 1914, so this may be just a memorial stamp? On the other hand, this German genealogy wiki page suggests it continued to exist 1914-18 but was associated with various other units. Very confusing stuff. In either case, they must have spent 1916 on the Eastern front.

The text provides no interesting information, just greetings to all and hope you are well. By contrast, on a similar postcard sent 26.11.1916: 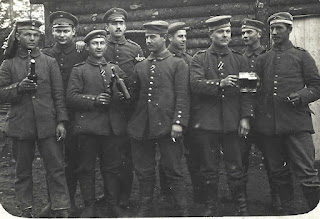 her brother-in-law Karl Witt (husband of her half-sister Marie Wittke) pointed out that one of his comrades shown was still available, and got him to co-sign the card. His name was Alfred Plenus (Plenus is a Lithuanian name that is found in East Prussia too). I think Karl is second and Alfred third from right in the front row.

Karl Witt sent several such cards and did make it back in one piece, but Alfred wasn't mentioned again.

In other news regarding old photos, read this twitter thread on an old album that got reunited with its family.