pursued by a bear

Every picture tells a story No. 35

Heinrich the cellist and Maria didn't have a car but they were close friends with a couple who had a VW beetle, and the four of them used this for many joint holiday trips in the 1950s, typically to the Alps and the south of Germany. (That must have been really cosy with four adults in the small car!)

There are many photos taken by one of the quartet showing the three others, but very few showing all four. Here's one taken at Titisee (a lake and town in the Black Forest) with the bonus features of a fake bear and a real dog (presumably the successor to Schluck the German shepherd). Heinrich and Maria appear on the right: 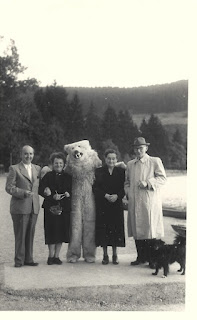 Update 6.5.22: I've been told there is an ancient Hotel Bären in Titisee, maybe the souvenir photo with the eponymous animal comes as part of their service?

A few examples of the trio format: 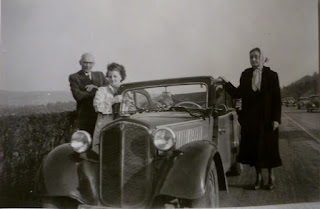 En route from Wuppertal to Idar Oberstein, Easter 1952. I'm assuming this was the car the friends had before the famous 1950s beetle, looks more like a pre-war model. I can't quite resolve the emblem - it's not like Peter Eberle's 1930s BMW, but a similar vintage and size from a different maker. Funnily enough, I don't have a photo of the beetle which they normally used. There is a photo with a beetle and a fifth person, but the registration plate doesn't make sense, so I'm assuming it's the other person's car. 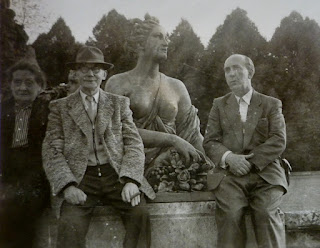