who should demonstrate tomorrow?

I don’t really read the right-wing papers, but have heard rumours that they are trying to dismiss the current wave of student protests against education cuts and tuition fees as “self-serving.” Which is of course a blatant lie, as the current students of year 2 and higher will not be affected by the changes, and those who have just started will only be affected in their final year.

The student protest is very much based on the principle that higher education is a public good that serves society as a whole and should therefore be funded by the state and free to those who have a sufficiently large brain to soak it up. The students’ side of the deal, of course, is that they are investing three years of their lives into the improvements of their minds, when they could just go after the money (the schoolgirl with the placard “Fine – I’ll be a stripper” comes to mind here).

Seeing that the government is trying to demolish this fundamental principle of higher education, the professors and lecturers should be first in line to man the barricades. The message the government has for them is that their work is really not in the public interest but only helping the individual customer. Now if I were a vice-chancellor of a UK university, I would have a word or two to say about this presumption. (And I am sure that if the Oxbridge VCs had spoken out on this issue, the world would have taken notice.)

Then, if we have to think materialistic thoughts, the school-children now under 16 will be hit hardest. If they are from below-average earning households, they stand to lose the Education Maintenance Allowance (EMA), and on top of that have to face the prospect of up to £27k tuition fees (plus the student loan they will need to cover living costs. Those who will be hit hardest may not have started following political events yet, so it’s their parents who should demonstrate on their behalf.

As the old Manics tune said so fittingly: “If you tolerate this, then your children will be next” (and yes I know where the slogan comes from, but that’s how bad the situation is).

So, if people think this through, the students may have some company during tomorrow’s demos. 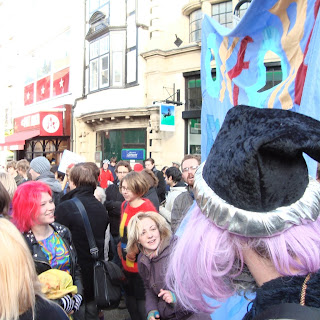 thanks, and thanks for following! enjoy!