All our instruments series, episode 3

We're now arriving at the earliest surviving instrument from my childhood (not sure what happened to the poor old toy saxophone?), namely my school recorder.

I learned to play it in primary school and still have the booklet with the tunes, and the dates of the lessons written in. Apparently it was a peripatetic teacher who scribbled the date of the next lesson into the book.

The recorder bears the trademark Schneider, so I think it was made by the company of Werner Schneider in Markneukirchen, Saxony, whose sons now trade as Gebr. Schneider. The tradition of making musical instruments in the Musikwinkel (musical corner) of the country was added to Germany's list of immaterial cultural heritage in 2014. Unlike the Hopf family, makers of my guitar, who also come from that area but moved to Taunusstein in 1948, the Schneider recorders stayed there. 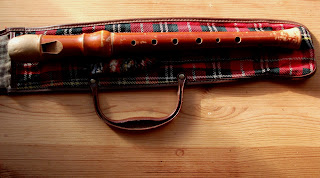 Musicians including Hans Martin Linde have criticised the German simplification on the grounds that it makes some of the "black key" notes needed in more remote keys impossible to play in tune. I guess the tunes you learn at school carefully avoid the notes that don't work well, so I never spotted any problems until I heard about this. I can also work with the English system (several recorders with that are going to turn up later in the series).