All our instruments series, episode 2


After Heinrich the cello and a tuba mouthpiece sadly lacking the rest of the instrument, the next longest serving instrument in my house is a Hopf classical guitar which turned 50 last summer. This is a precise dating, as my cousin got it as a birthday present back in 1968. I've been playing it badly since the mid-1970s, but less regularly since I started to toot a flute, back in 1999. However, I did play a few notes on it at the Misa Campesina 2017.

On the occasion of its 50th birthday, the young stringplayer named it Blue, and as that refers to the figure Johnny Blue in the eponymous song, I suspect it's henceforth a he. Here's a portrait of Blue and yours truly, taken back in 2012: 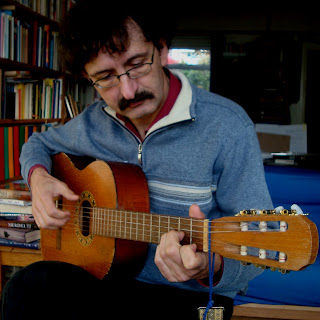 And here's the video of a few notes I can still remember after 20 years of not playing very much ...


It includes the intro to a song by Reinhard Mey, then a piece I learned from a guitar magazine under the title of Shake that thing, but googling that title now leads to a different piece, and finally a failed attempt to remember Fuer Elise - I had a nice guitar score for that but appear to have lost it.