Today's round-up of science stories. Links are normally to press releases on EurekAlert (at the bottom end I may also add a couple of newspaper stories). I include quotes from the summary (using quotation marks) in cases where the title alone doesn't reveal what the story is about.

If you missed the memo: In the last five years or so I used to share/archive a selection of news stories from Eurekalert on tumblr each day (as well as tweeting them), but as I expect tumblr will sink after the ridiculous nipple purge of Dec 17, I have now moved the archive function here, with one post each Tue-Fri collecting links to releases that I found noteworthy. Anyhow, here goes (not very many items today, so no categories needed):


Feisty hummingbirds prioritize fencing over feeding
"Hummingbirds are fierce fighters, but also efficient feeders with tongues and bills well adapted to extracting every bit of nectar from a flower. Why, then, do the males of some tropical species have bizarre hooks, serrations and hard tips that defeat efficient nectar extraction? Using high-speed video, UC Berkeley researchers have documented how these males use their weaponized bills to fight rivals for food and mates, and the trade-offs in choosing fighting prowess over feeding."


How does the brain learn by talking to itself?
My brain keeps asking itself that question, but never gets a good answer. 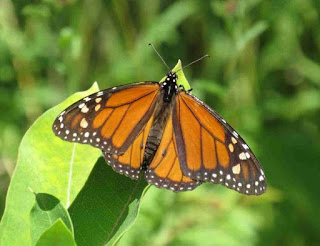 This is a monarch butterfly.
Credit: Pat Davis


A 'pacemaker' for North African climate
"Researchers at MIT have analyzed dust deposited off the coast of west Africa over the last 240,000 years, and found that the Sahara, and North Africa in general, has swung between wet and dry climates every 20,000 years."

In the news media today, we have a whole load of solar system exploration

* China's landing on the far side of the Moon. Media reports somehow forgot to mention that there must be an orbiter involved to relay communications. I'm pretty sure no existing communications technology can tunnel through the Moon. Anyhow, the Guardian report is here.

* And New Horizons' pics of Ultima Thule are getting better, here.