It may not be quite as famous as the six cello suites, but JS Bach also wrote a suite of dances for the unaccompanied flute, which only survived in a single transcript, and which after its rediscovery became known as the partita for flute (BWV 1013). Like the cello suites it involves a lot of jumping around between higher and lower registers to create the illusion that the soloist can simultaneously play the tune and the accompaniment. Here is a recording of the entire partita by Peter-Lukas Graf.

I prepared the second movement, the Corrente, for this year's festival and performed it yesterday, which was a huge challenge, but I got through in one piece. In a desperate attempt to persuade my brain that it has seen the notes before and doesn't need to panic at every accidental, I memorised it, meaning that for each line I have at one point been able to play it from memory (slowly), although some lines may have faded once I moved on to tackle the next bit. Intriguingly, even though recall from memory is too slow to be useful for performing, this helped with playing it from the sheet.

I've also learned the first movement, the allemande. The main difficulty in that one is that the composer seems to be blissfully unaware of the fact that flautists need to breathe to survive. Among the references the Wikipedia article cites, most focus on the Allemande, and one, intriguingly, even on one note, the F# in bar 20: Michel, Winfried. 1992. "'Ein Ton': Das fis im zwanzigsten Takt von Bachs Flötenpartita". In Travers und controvers: Festschrift Nikolaus Delius, edited by Mirjam Nastasi, 67–87. Celle: Hermann Moeck. ISBN 3-8754-9057-6.

I will also go through the last two movements, but at first reading they seem to be much more accessible than the Corrente.

So here comes the still life with Grandfather(ish) clock: 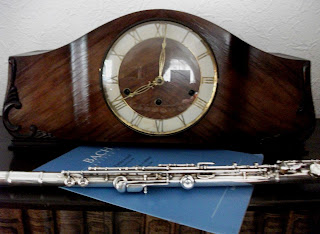 Again, a score found at Oxfam, and based on the copyright date it could be as old as I am.


PS: A couple of weeks after the performance, I've now decided to move from father to son ....