We know shockingly little about my greatgreatgrandfather in the paternal line, the father of Heinrich the cellist. We do know that he worked for the railways (Bahnassistent it says on some documents), and we know of four different places of residence in different phases of his life, so I now checked up when these places got their railways, and it so happens that the dates when they were connected match the dates when my ancestor was there, so I am assuming he was involved in setting up the railways more than running it, until he reached his terminus, which was Tangermünde. This is reminiscent of another railwayman ancestor in the same generation who had five daughters, whose birthplaces follow the development of the Alsace railwayline very neatly, moving northwards from Mulhouse.

For Richard the railwayman the moves are a bit less tidy and we have a lot less information, but here is a glimpse of his moves:

1852 born in Breslau (Wroclaw). His parents are orphans in the sense that we don't know their parents, so I'm throwing out their names here in the hope of catching something: Johann Friedrich Wilhelm Groß born 1830, a carpenter, and Rosina Faudner from Chursangwitz. They had married in June 1852 in Breslau.
1874 he was spared military service due to crossed legs and height - not sure if he was too tall or too short but looking at his descendants as well as the literal meaning of our name being tall, I don't think he can have been too short.
1877 - 1879 he married twice-widowed Maria Louise Mentzel, presumably between the birth of her son from her second marriage, in 1877, and the birth of their daughter, below:
1880 daughter Gertrud born in Neurode, which was connected to the lines leading to Glatz and Waldenburg in 1879 and 1880, respectively
1882 son Heinrich (the cellist) born in Zella St. Blasii, where the local part of the mainline connecting Erfurt to Schweinfurt (and Berlin to Stuttgart, in fact if you look at the big picture) was completed in the years 1881-84.
1888 son attends school at first in Stendal, then in nearby Tangermünde. The railway line linking both places was completed in 1886. (Tangermünde had the important river port on the Elbe, but Stendal was bigger and eventually won the competition to get the mainline rail connection to Berlin).
The family remained in Tangermünde, where both children jointly celebrated their marriages in 1908, until Richard's death in 1913.

So at least that kind of explains his geographic mobility. Not quite sure what he did for the railways, but one document referred to him as an office clerk so it must habe been on the admin side rather than on the tracks.

And here's his signature from one of his son's school reports: 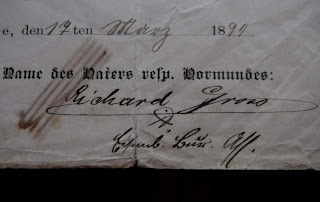 (not sure about the middle word in his job title here, but it could be "Bur." for Bureau, right? In which case we have Eisenb. Bur. Ass., or Railways office clerk.)