The cello suites: In search of a baroque masterpiece
Eric Siblin
Vintage paperback 2011


I remember seeing this book on a special display at Blackwells Music shop when it came out in hardback in 2009. I think they put up Steven Isserlis’s recent recording of the suites on a display stand next to it. At that point the suites went way over my head, so I didn’t buy it then.

Years later, the young cellist prepared the pair of bourrées from the third suite for her grade 7 exam and I got to learn a little bit about how these things work, and then I watched a masterclass where Natalie Clein taught three Oxford students who had prepared different movements of the suites, and her explanations still resonate. Now with the corona crisis shutting down my normal schedule of musical activities, I’ve started tackling the suites myself, starting with those bourrées, and now working through the first suite. At some point I remembered the book I saw back in 2009 and ordered a copy. In the swing of my lockdown cello obsession I read it immediately.

The book is a nicely intertwined braid of three strands, including the lives of Johann Sebastian Bach and Pablo Casals (who famously dragged the suites out of obscurity) and the voyage of discovery of the author. Siblin isn’t a cellist himself, he plays guitar and managed to learn the famous prelude of the first suite on this instrument, but very quickly gave up an attempt at learning the cello. He also joined a choir workshop to sing a Bach cantata for a weekend. (Heck, I’ve been singing the B minor mass for a whole term, I win!) Other than that, it’s very much a journalistic effort based on extensive reading and interviewing a few relevant people like the cellist Mischa Maisky, who recorded the suites and also played one of them for Casals.

Siblin had a particularly lucky break when an old man he overheard saying the word cello in a Montreal café turned out to be Walter Joachim (1912-2001), the former principal cellist in the city's symphony orchestra, who told him about how he saw Casals playing the suites in Düsseldorf in 1927. (Which is a very significant date for me, as I have photos of my great-grandfather playing cello in a string quartet in nearby Elberfeld in the same year. Did he also go and see Casals? I’ll probably never know.)

All this makes for a lovely story of multiple discoveries, connections, losses as well – Bach’s original manuscript of the suites has never been found! I was encouraged to learn that Casals, who discovered the suites at age 13, spent more than 10 years working on them before he started playing them in public. As for Bach, I feel the book helps me a little bit to get closer to understanding his mind. Although it is no substitute for actually playing his music. 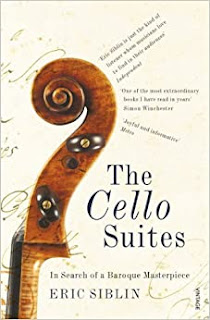