ESPRESSO confirms the presence of an Earth around the nearest star
The existence of a planet the size of Earth around the closest star in the solar system, Proxima Centauri, has been confirmed by a team of scientists including researchers from the University of Geneva. The planet, Proxima b, has a mass of 1.17 earth masses and is located in the habitable zone of its star. This breakthrough has been possible thanks to measurements using ESPRESSO, the most accurate spectrograph currently in operation. 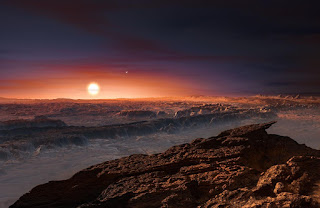 This artist's impression shows a view of the surface of the planet Proxima b orbiting the red dwarf star Proxima Centauri, the closest star to the Solar System.
Credit: © ESO/M. Kornmesser

Genomic analysis shows long-term genetic mixing in West Asia before world's first cities
Scientists analyzed DNA data from 110 skeletal remains in West Asia dated 3,000 to 7,500 years ago. The study reveals how a high level of human movement in West Asia during the Neolithic to late Bronze Age not only led to the spread of ideas and material culture but to a more genetically connected society well before the rise of cities, not the other way around, as previously thought.
Different PR on the same paper:

Who were the Canaanites? New insight from 73 ancient genomes
See also my ancient (2017) feature on antiquity's genomes, which also included a section on the Canaanites.
And another new paper covering the same geographic area:

4,000 years of contact, conflict & cultural change had little genetic impact in Near East


Richard Horton on the "scientists" still being used to prop up the UK govt. failing in its pandemic response. Personally, I stopped taking Whitty and Vallance seriously on March 13 when they were talking herd immunity.