So tomorrow the UK govt. is to announce some loosening of coronavirus restrictions. They are already quite loose, not nearly as draconian as what was happening in Spain and in France, but hey, I'm all in favour of letting people sunbathe in the nearest park, and if there isn't enough space, force the golf clubs to open their gates. But are we ready to come out of lockdown?

As the government is clearly struggling with elementary maths, I have taken to keeping track of numbers myself, based on the official death counts (probably only half of the real number of casualties, but let's stick with the firm figures).

So where do we stand with the figures now? By yesterday, 8.5. we had 31,241 official deaths announced. That's 3731 up within 7 days, giving an average of 533 per day (weekly averaging is necessary, because the weekend figures are artificially low).

Two weeks ago, week ending 25.4., that figure was 693, so it is coming down, but it hasn't even halved. Close to peak deaths, for the 7 days ending 18.4., I calculated an average of 798 (at that point it was hospital deaths only), there may have been higher numbers nearby, but the average didn't reach 1000. So it's come down by a third in three weeks, and at this rate it will come down by another third by the end of May, so we'll be at 357 daily deaths by the end of the month (and approaching a total of 40,000).

So what does that tell us about coming out of lockdown? If mortality among those infected is 1%, the new figure tells us that three weeks ago, right in the middle of our 6-week lockdown, there were still more than 50,000 people getting infected every single day. Applying our 33% decay from above, we should now be at 33,000 per day. Which is way too many to control.

In order to control and contain new infections, you will perhaps need 10 times more tests than you have new infections, to be able to test the contacts of each new case identified. So right now we would need 330,000 tests per day (and the people to handle them). At the moment there is no chance of that happening, so no exit from lockdown possible.

How about the end of the month? In another 3 weeks, coming down 33% again, we might be at 22,000 new infections per day, and the government promises 200,000 tests per day, so at that point it would be a struggle, but it could work under competent management. Which we don't have. But good luck if you want to try.

Oh, and one more thing, we now see very clearly that the infection rate is coming down much more slowly than it went up - essentially because the R value, even though below 1, is a lot closer to 1 than it was on the other side, when it was around 3. Which completely invalidates the govt. argument that introducing restrictions too early would mean people get tired of them too early and the lockdown would fail. On the contrary, if they had introduced the same measures 10 days earlier, when daily infection rates were ten times lower, we would have a much smaller hill to climb down from, maybe 10,000 new infections instead of 100,000 (as calculated from deaths 3 weeks after, not from the tests which are insufficient) per day, so at that point, a six week lockdown would have easily brought down the new infections from 10,000 by 33% in three weeks, then by 33% again in another three weeks to 4,400, which would be manageable with the testing capacity we have right now. And we would already be in a post-lockdown regime of testing and tracking right now.

That thing in early May about the perceived risks of locking down early may have been an error. It may very well have been a lie. 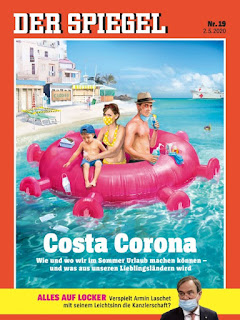 In case you need inspiration for your holiday activities, last week's Spiegel cover was quite funny.


Update 14.5. watching the decay of the death rate this week, it appears that it is coming down a bit faster than I estimated above, by 22% in seven days, which could give us a 50% decline in the three weeks from 7th to the 28h of May, so average daily deaths could drop below 275. After that, the effect of this week's chaotic loosening of restrictions will kick in and who knows what happens. Death rates may very well go up again. Last summer, when Johnson chose his first cabinet, my first thought was "deatheaters". Didn't think that this would come true quite so fast.