before Neanderthals and Denisovans

I have written quite a few pieces about Neanderthals and Denisovans in recent years, but not all that much about the earlier stages of human evolution. This was mainly because I usually covered molecular / genetic studies into prehistoric populations, beginning with the first attempts at the Neanderthal genome and leading up to today's remarkably rich, genetically based accounts of our prehistory.

The limited shelf life of DNA means that we aren't likely to see any comparable details regarding the populations and species that came before Neanderthals and Denisovans, the likes of Homo erectus and Australopithecus afarensis. However, researchers have now succeeded in getting protein sequences from teeth of human relatives up to 800,000 years old, which drives the molecular investigation of human evolution much deeper into the past than has been possible before. Which was a good excuse to expand the range of my coverage as well and look into the deeper layers of our evolution in my feature which is out now: 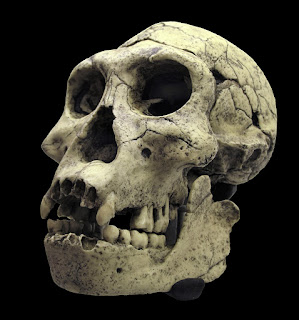 Homo erectus remains have been found in Africa, Europe and Asia. This skull is from the Dmanisi cave in Georgia, where samples for successful proteomic analyses were also obtained. (Photo: Rama/Wikimedia Commons (CC BY-SA 3.0 FR).)
Posted by Michael at 8:35 PM