Life on the rocks helps scientists understand how to survive in extreme environments
This is about life in the Atacama Desert of Chile, one of the driest places on Earth, and a model for habitats on Mars. 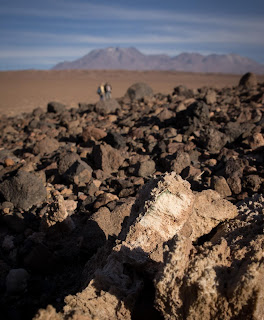 In the Atacama Desert in northern Chile, one of the driest places on Earth, microorganisms live beneath a thin layer of rock to gain some protection from harsh winds, solar radiation and heat. Nooks and crannies in the rocks is also where water, while limited, may collect.
Credit: Jocelyne DiRuggiero/Johns Hopkins University


Exoplanets: How we'll search for signs of life
An interdisciplinary team of researchers, led by Arizona State University, has provided a framework called a 'detectability index' to help prioritize exoplanets to study and provide scientists with a tool to select the best targets for observation and maximize the chances of detecting life.

New ancient plant captures snapshot of evolution
Researchers have discovered an ancient plant species whose reproductive biology captures the evolution from one to two spore sizes -- an essential transition to the success of the seed and flowering plants we depend on.

Predators help prey adapt to an uncertain future
What effect does extinction of species have on the evolution of surviving species? Evolutionary biologists have investigated this question by conducting a field experiment with a leaf galling fly and its predatory enemies. They found that losing its natural enemies could make it more difficult for the prey to adapt to future environments.

Last supper: Fish use sharp barbs and spines to fight off hungry seals

To make an atom-sized machine, you need a quantum mechanic

Activation of the SARS coronavirus 2 revealed
A viral spike protein mediates entry of SARS-CoV-2 into host cells and harbors an unusual activation sequence. This sequence is cleaved by the cellular enzyme furin and the cleavage is important for the infection of lung cells. These results define new starting points for therapy and vaccine research. In addition, they provide information on how coronaviruses from animals need to change in order to be able to spread in the human population.

Robot vacuum cleaner conveys seven dwarf personalities by movement alone
Researchers used a vacuum cleaner and the personalities of three of the Seven Dwarfs from Snow White to demonstrate that people can correctly infer a robot's personality solely by how it moves.
I'm sure Disney will be pickung up this idea in no time.

The UK is now certain to exceed my prediction of 33,000 deaths from Covid-19. Today, figures from the Office for National Statistics combined with results from Scotland and NI amount to more than 32,000.