I would say happy new year everyone, but I guess last year's data show that the wishes don't really work, so let's just get on with it.

For the eleventh month of my Plague Year Bach Project, I have been bold and moved into a new key, choosing the Minuets from the second suite, which is in D minor. Thus, the first of the minuets is in D minor and the second in D major. After a quick go at sight reading both, I am now slightly scared by the awkward chords in the first minuet, so I'll start with the second, which looks quite a bit easier.

I'm starting with Inbal Segev's musings, as always, and I found recordings from:
Eva Lymenstull (that's the whole D minor suite, but I've included the timestamp for the minuets in the link to take you there directly).
Misha Maisky (ditto)
Laurens Price-Nowak (ditto)

In December, I didn't tackle a new movement but completed memorising the Bourrees from the third suite and also started playing the first bourree with a metronome. Also making progress with memorising the Gigue in C, only a couple of lines left to learn of this movement which is quite long. I've made a ranking of the movements in tiers last month (inspired by the covid tiers), but it now occurred to me that it would be more constructive to have a system where rising numbers mark progress (as in grade exams) rather than crisis levels. So, flipped upside down and with the bourrees promoted by a grade, my revision list now looks like this:

Future levels with higher numbers may include: able to play with a metronome at a reasonable speed, able to perform, actually performed. 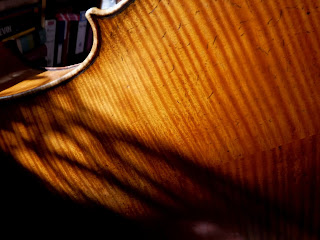 Did I mention that Old Heinrich has a very beautiful backside?