Julius Düsselmann opens a new shop at Luisenthal near Saarbrücken, around 1911. He is seen in the door without a hat, the child in front of him is my grandmother. On the side wall you can read (maybe, I'm struggling a bit with deciphering):

So I reckon you could buy food and wine and clothes there. The carriage looks like he even did home deliveries. 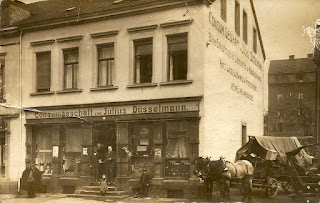 Looking for other examples, I found a photo using similar choreography, around the same time and same area, here.

Julius's (very) extended family hailing from Krefeld is here. His maternal family is the Imig clan from Simmern.

Julius (1883-1950) had a life of many ups and downs. After an apprenticeship as a Kaufmann, he allegedly wanted to fly Zeppelins, which didn't work out. Instead he served in the colonial war in 1904/05, about which I have another picture to share some other time. He came back with health problems, married his cousin Helene Kauer and settled for a life as a shopkeeper. First as an employee in the shop of a mining company in Merlenbach in Lorraine (today Freyming-Merlebach) then from around 1911 onwards, running his own shop in Luisenthal, near Saarbrücken. Today part of the town of Völklingen, this place is also characterised by mining and steel industry. The name is associated with a severe mining accident in 1962.

This shop seems to have gone well, as he also set up a second branch, managed by his sister in law. In 1918, however, as the Saar area came under French occupation, he retired from business on health grounds - a heart problem possibly caused by the tropical disease he caught in Africa (possibly typhoid fever), and retired to the countryside, always a bad idea if you ask me. Economic crises and hyperinflation of the 1920s forced him to go back into business, which led him to Rheydt, Königsberg and finally Bad Nauheim, all of which I have covered in my #lostcities series.