We're approaching the end of the series and coming to cities which I actually remember from my childhood. Memories left me with a soft spot for Bad Nauheim, even though when I was there as a child everybody was about a hundred years old and seeking spa treatment for some horrible diseases. My great-grandmother and great-aunt lived in a crumbling art nouveau villa which I've raved about before, and which in the whole series is the only property to mourn. Although the Frankfurter Str. is the main through road and quite noisy, the location is quite central and within walking distance of the railway station and the historic spa facilities. Cafe Bienenkorb in the Hauptstrasse is another reference point I remember.

Let's take it chronologically, though, this is what happened:

After fleeing from Königsberg (see episode 6) and rejoining the rest of the family in the sticks, my great-grandfather remembered that he quite liked the spa town of Bad Nauheim where he had spent time as a reconvalescent decades earlier. In July 1945 he moved there, initially to a room in Frankfurter Str. 26. By November he had moved to Frankfurter Str. 12 (the villa mentioned above), found space for the family, and started relaunching his trade with textiles. He died in March 1950, however, aged 66. My great-grandmother stayed at that address until she died in 1972. My great-aunt had continued the textile business until 1960, then bought the property with funds from the compensation for the lost factory in Königsberg. At that point she gave up on the textiles and operated a bed-and-breakfast for spa guests, but she hadn't inherited the business sense of her father, clocking up debts to wipe out the value of the property.

When I was visiting there as a child, we used to make fun of the fact that my great-aunt changed the layout of the flats all the time, so the running joke was that the loos are now where the kitchen used to be. Which may explain where the money went. She also hired a carpenter to build shelves for a customised floor-to-ceiling library (which I inherited, so mustn't grumble) and had a habit of taking taxi rides everywhere.

Of the town, I remember the swimming pool which included a heated outdoor basin even in winter (maybe not the most sustainable thing on climate grounds). I also went ice skating there (I believe Bad Nauheim used to be successful in ice hockey) and saw a lot of the historic spa buildings, like the ones in the post card below. Funnily enough I don't remember the lake at all, maybe that was too far, being on the other side of the town.

Re-visiting the town in 2010, I found the town layout built around the spa rather than a proper town centre slightly odd, but then again, the sheer wealth of art nouveau architecture that survived there makes up for that. Although it's still relatively small (amazingly, in 1970, only 14,000, but now upwards of 32,000), I could walk around a few days just looking at the houses. And it does have direct trains to Frankfurt, if one gets fed up with the small town thing. 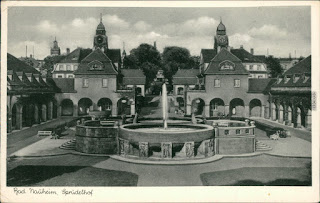 Bad Nauheim 1956 (still looked very much the same when I spent time there in the 1970s). Source