Fun fact: All four of my grandparents lived at Idar-Oberstein for some time, although never more than three of them simultaneously. By the time I was born, however, two had died and the other two moved to the countryside, 30 km away from the town. Which is why it pops up in my list of cities that we lost touch with.

Much like Wuppertal, but on a ten-fold smaller scale, Idar-Oberstein is the result of a merger of two towns squeezed together in a river valley. The merger of Idar and Oberstein occurred soon after that of Barmen and Elberfeld, in October 1933, producing a new town of just over 32,000 residents, on the river Nahe (semi-famous for its vineyards). The little creek separating the two parts is the Göttenbach, and a high school serving both towns was located near that boundary and called the Göttenbach-Gymnasium. Which is what brought my paternal grandparents there in 1951. They lived in Hauptstraße, literally just across the road from school (which was in the building now occupied by the municipal administration, which you can see here). 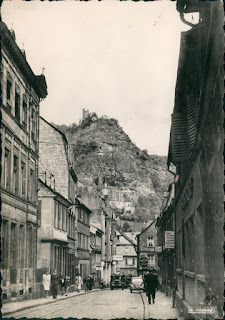 Postcard: Hauptstraße Idar Oberstein, 1953, looking towards a well camouflaged Felsenkirche. It is more conpicuous in recent photos where it is painted white. This is the street where my paternal grandparents lived until 1960, although I’m not sure whether the relevant building appears in this shot.
Source

The maternal grandparents came there from Aachen in 1940, which looks like a strange move for a customs officer, but I am told my grandfather was transferred to a department involved in policing alcohol duties, so that sounds fun. Unfortunately, he was then called up for the war and didn’t come back. My grandmother died in Idar-Oberstein in 1962, less than two years after the other grandparents had moved to the sticks.

Idar-Oberstein in the post-war years was under French occupation control. I read that the authorities weren’t all that keen on prosecuting Nazi criminals. Instead, the Grande Nation relied on its cultural charms, with French being taught at the high school and French culture being supplied in abundance. I hear Jean-Paul Sartre and Simone de Beauvoir stayed there for a night in 1948 and watched an opera performance.

Desperate to create more space for cars, the town planners made the river Nahe disappear under a lid in the 1980s – they should have taken up the idea of Wuppertal and built a suspension railway above the river! Since the Nahe has disappeared, the remaining attractions of the town are now the Felsenkirche, a tiny church implausibly popping out of a vertical cliff face, where various people got married, and the museum of gems and minerals celebrating the long tradition of gemstone processing and trading. Links with Brazil are particularly strong, as many migrants from the region went there and sent minerals back. So you get to see lots of massive agates and amethysts hailing from Brazil but handled in Idar-Oberstein.