citizen science then and now

Back in the happy days before Brexit and Trump became a thing, I regularly attended Earthwatch events and wrote stories about their exciting research projects around the world which are made possible by recruitment of volunteers who pay for the privilege of taking part. That activity faded away as the relevant contacts at the organisation kept being replaced by new people, and I lost touch at some point. Towards the end of the phase, I suggested writing a book to be released on the 50th anniversary of the organisation, splashing out on all the wonderful work they are doing around the world. Strangely I never got anywhere with this idea. Emphasis at the organisation shifted away from the volunteer-paid research expeditions and towards partnerships with corporate sponsors as well as more affordable activities closer to home, so that may have been one reason why I didn't get much response re the history book.

The 50th anniversary happens to be now, and as there have been a couple of new developments in citizen science, I have taken the opportunity to wrap up the 50-year history of Earthwatch in a feature on new trends in citizen science more widely. Ironically, one of the trends is to get rid of the citizen scientist altogether and just use their social media posts to algorithmically identify species observations. 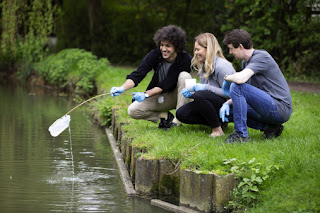