Every picture tells a story, No. 12

Richard was behind the camera in the last instalment, now here's the photographer himself, from the same stash of negatives, so presumably also from the time between 1930 and 1933. Not quite sure what's happening here, but he seems to be conducting chemical experiments at home. He was studying chemistry, maths and physics for a teaching degree. He appears to be having a good time, too. And a sense of mischief. (And no safety specs. Don't do that, kids!) 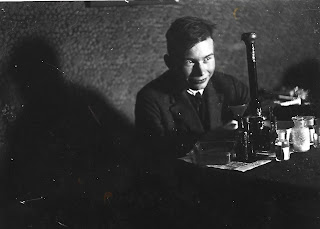 Another photo of a simlilar home-experimenting situation, this time looking more serious: 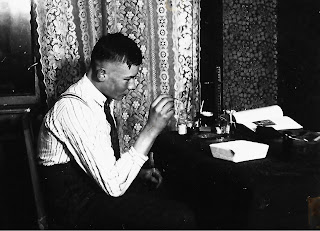 He went on to marry Ruth from episode 11. Although they took geographically very different routes before doing their last terms of university at Bonn, they were both born in small towns in Lorraine, and three of their four parents had lived in Alsace. (As Nazism got from bad to worse, they visited Strasbourg in the spirit of "while we still can".) And they each had one railway grandfather.

This photo is also on flickr (and a few others, too).