Ruth Düsselmann, the little girl on the steps of shop in Luisenthal grew up, and here she is in her student days in Bonn, sharing a giggle with her friend Hanna Dissmann (left). The photo was taken by fellow student Richard Groß, who may have known Hanna before he met Ruth, but he ended up marrying Ruth. Both Richard and Ruth were studying natural sciences for a teacher degree, so I'm guessing Hanna did too, but not sure. I did meet her once or twice half a century later, but didn't ask her any personal questions. Ruth arrived at Bonn University in the summer of 1930, Richard in the winter before, and they both graduated in 1933 (in a hurry as they were worried that their favourite profs would be chased away by the Nazis), so I am guessing the photo dates from between 1930 and 1933.

In these last five years, as various forms of 21st century fascism began to spread and eat away the progress we made over the previous decades, I often thought of my grandparents and what it must have been like for them, in their 20s, to see their world being pulled away from under their feet. I'm looking at these photos for a glimpse of who they were before shit happened - all I got to know as a child was the version after shit happened. 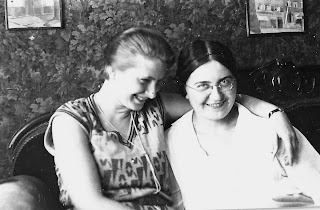 Richard was a keen photographer and left mountains of photos and negatives when he died. This is one of a bunch of photos I found as negatives of which I made small prints back then, in the late 1980s, so this is now the second time I am attempting to rescue this from oblivion. Here is another one from the same film, now trying to look serious: 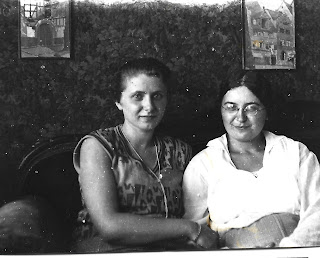 There will be more photos from his vaults to be rescued for sure.