Rummaging around the library I inherited I discovered a few books by the 2014 Nobel laureate for literature Patrick Modiano, including this one both in the French original and in a German translation: 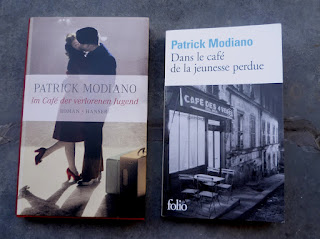 I loved the French title and the German cover art, so went on to read the original. It is very short, with chapters from different perspectives describing the comings and goings of people who remain enchantingly mysterious, plus, it’s Paris shrouded in darkness and a haze of nostalgia, so what’s not to like. I disapproved of the ending though. And I'm wondering if, by not saying much at all about the characters, the author lets me do all the work. I mean I do love his elusive protagonist, Jacqueline, but I realise that I may be projecting my own expectations onto a blank canvas here.

After enjoying the misty mysteries of this one, I also read Du plus loin de l’oubli, which turns out to be very much the same, with some of the characters possibly overlapping (hello again, Jacqueline!), except that now part of the story (?) is moved to London, which somehow put me off a bit. So I guess I know the pattern now, and I don’t have to read the third one I found, which is called Pour que tu ne te perdes pas dans le quartier.