The planetary boundaries concept is useful to illustrate just how unsustainable our use of global resources is, and how we are shifting our planetary environment out of the holocene conditions, into the anthropocene. Out of the nine general areas defined by Rockström and colleagues in 2009, there's only one that we have been able to fix with a global effort, namely stratospheric ozone. Among the others, four were found to be breached, and now a new study has added "new entities" including chemicals and plastics as the 5th. I used this occasion to have a look at the boundaries concept and the situation around chemical and plastic pollution.

Loving the somewhat dystopian set of three photos the editorial colleagues found, illustrating pollution on land, at sea and in the air, here's the one for the air: 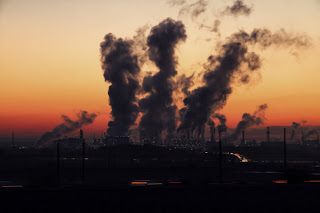 The numerous innovations of the chemical industry over the last 200 years have been celebrated, and many of them have added to the comforts of modern life. However, efforts to mitigate and control the impact of chemicals on the environment have failed to keep up with the growth rates of invention and production. (Photo: SD-Pictures/Pixabay.)

See also the twitter thread combining all CB features of this year.