Every picture tells a story No. 26

Ernst Leopold the steel worker had at least seven brothers and sisters, and his three sons had around a dozen cousins. One of the brothers was Friedrich with the fiddle. Another, Albert Kosmowsky, was a forester's assistant at Forsthaus Gottesgnade, Sangnitten, Kreis Preussisch Eylau, East Prussia. He was working for the Baron von Stegen.

Here he is hiding in the shadow of his forester's hat, with his wife Auguste next to him. The children are, left to right: Hilde, Emmi, Fritz, Lieselotte (a visiting niece from Allenburg, daughter of his brother Franz), and Charlotte: 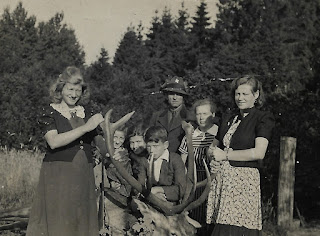 Charlotte was born in 1919, so I concluded the photo might date from the mid or late 1930s. I'm getting the feeling that the looks on their faces get grumpier in direct proportionality to their ages, so that may reflect the dark times, looming war, etc., of which the younger children were blissfully unaware. I might follow Charlotte's tracks in a later entry.

We'll have to talk about the poor old animal in this picture too. At first glance, I had naively assumed that the family was posing with an antler serving as decoration on some sort of garden (or forest) furniture. As you would if you were a town mouse visiting some rustic forester's hut today. Then I found this other photo, with the same setup, minus the family: 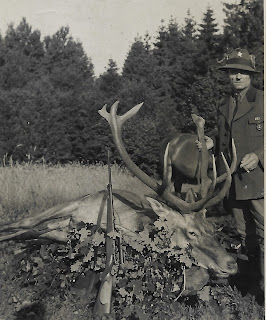 So the story is he shot the stag and then gathered round the whole family plus a visiting niece to pose with it. Oh well. This one is dated 1941 (on the back, not sure by whom), so I guess the good news is that at this point in history Albert was allowed to stay at home shooting game as opposed to going to war and shooting people.