Every picture tells a story No. 24

On one or two occasions I rented a convertible to visit my aunt after she had moved to a very remote place in the south of France far from the next railway station. When I took her for a ride she remarked that she hadn't been inside a convertible since her childhood, when her father (customs officer Peter Eberle whom we last saw in Gronau in 1929) had a BMW convertible as his service vehicle provided by the customs office Aachen.

Peter arrived in Aachen in 1936, when he was promoted to a post with 112 people to boss around. The fact that he kept being promoted after 1933 seems to suggest that he adapted to the Nazi system enough to ensure a smooth career, although I am not aware of any political statements, inclinations or activities. As he died in 1945, his involvement with the regime hasn't been officially investigated.

This photo shows him (left) with his car and a colleague who may be his driver, not sure. It seems to be confirming his daughter's memory of the make, as the car looks very much like a BMW 319, which was produced from 1935 to 1937, so this all fits together beautifully. 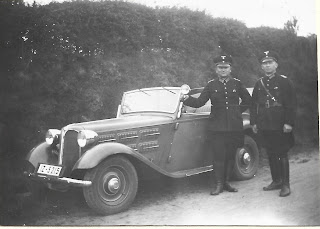 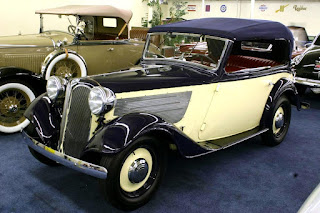 The number plate, IZ-5215 follows a convention in place from 1906 to 1945, where Roman numeral I plus a letter was for Prussia, II plus a letter for Bavaria, III plus a letter for Wurttemberg, etc. Confusingly, some smaller states also used only Roman numerals or only letters. While some organisations and state services including the national railways, the Red Cross, and the army had their own codes, the customs service did not.

Within Prussia, the letter after the I defined a region, and not surprisingly the Z is for the Rheinprovinz, to which Aachen belonged, so that all makes sense.