what to wear at Porta Westfalica

Every picture tells a story Nr. 23

Heinrich the station master at the Kreisbahn Minden came from a farm in nearby Neesen, now part of Porta Westfalica. His mother, Luise Schilling (1841-1921), had inherited the farm from her parents Heinrich Schilling and Marie-Luise Stohlmann. It had been the Stohlmann farm since 1788. With her husband Christian Nagel she had 11 children. The family fell into poverty, had to sell the farm around 1900 and Christian ended up transporting cement between the local cement factory and the river Weser.

With this background, it is understandable that Luise always looks grumpy on the images we have of her. What intrigues me though is that she always wears the local traditional dress (Tracht), which is quite elaborate and probably hinders most daily activities. Here she is with her son Wilhelm (the next younger child after station master Heinrich), his wife Karoline Klostermann, and their only child (as far as I know), Elfriede Nagel. I don't know Elfriede's year of birth but she got married in 1931, and her father was born in 1881, so from these dates we can interpolate that this photo must date from the 1910s: 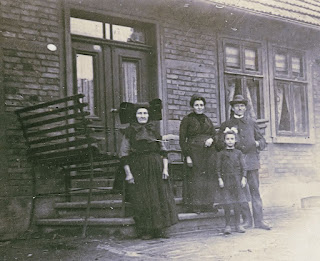 I'm also intrigued by the bench built specifically to be put on the stairs. For closer inspection of her clothes, I'm throwing in a portrait as well, presumably also dating from the last decade of her life: 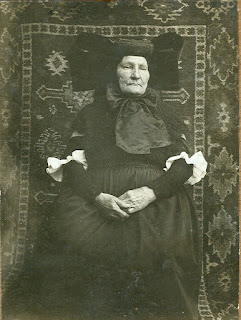 And to give you an idea what this may have looked like in real life and in colour, here's an old postcard from the area: 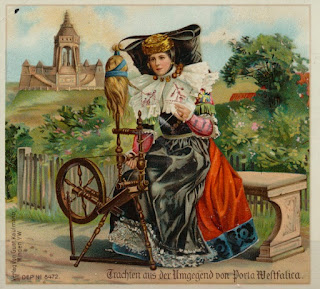 Another postcard including the male version as well is here. In the German edition of Wikipedia you find further details under Schaumburger Tracht. Specifically we appear to be dealing with the Bückeburger Festtagstracht here (Bückeburg was the capital of the tiny dukedom of Schaumburg-Lippe, I only know of its existence because Frieda the pianist studied at the conservatoire that the last duke set up in a final blast of exuberance).

The farmhouse, now known as Schillingshof, survives to this day, I hear it has been refurbished in 1996 and looks fabulous. I believe the address is Kloppenburg 18.