Every picture tells a story No. 27

When I prepared the entry with young Auguste Faust posing outside the cooperative at Allenburg (Kreis Wehlau, East Prussia) where she worked around 1919, I went through a slideshow of 170 or so old photos of the town to identify the building, which I eventually did, it's right on the market square and appears in several postcards including this one.

In the process I got to see quite a few photos showing how badly the town including its historic church with the iconic tower featuring stepped gables was damaged during WW1, which was a surprise to me. There had been hardly any incursions of foreign troops onto German territory during that war (which was part of the reason the stab-in-the-back myth worked), but it turns out Allenburg was among the tiny number of exceptions. It was conquered by Russian forces in 1914 and suffered severe damage before it was taken back. (Here is a video linking some of these old photos in chronological order.)

Learning all this was a lightbulb moment in that it explained another old photo we have among Auguste's belongings, namely a postcard showing Kaiser Wilhelm II visiting Allenburg, with a backdrop of buildings in a less than presentable shape (although not completely destroyed). Not sure about the date, but a separate photo of the empress Auguste Victoria viewing the destroyed church at Allenburg is dated 30.7.1915, so I'd assume the Kaiser was in town on the same day or perhaps earlier. I had always wondered why on earth somebody would print a postcard of the Kaiser being driven past some derelict buildings. Now I know, and here it is: 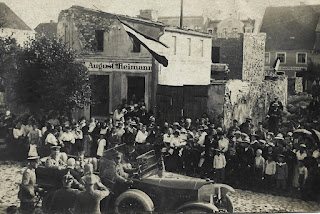 One of Auguste's siblings sent her this card by mail in July 1925 (more than two years after she moved to Hamborn, and long after the Kaiser's empire had ceased to exist), just to say I'm ok how are you? and she kept the card among the photos of her young relatives who served in the war and may not have come back. So I gather it must have meant something to her beyond the trivial message. I wondered whether she actually saw the Kaiser visiting. Heck, as there may well be a hundred people in the photo, and the town had fewer than 2000 residents, there was a reasonable chance that she was in the crowd pictured.

So I did a high resolution scan (1200 dpi is the best I can do) and zoomed in, and I think the woman in the white blouse just behind the emperor's car, right in the centre of this crop: 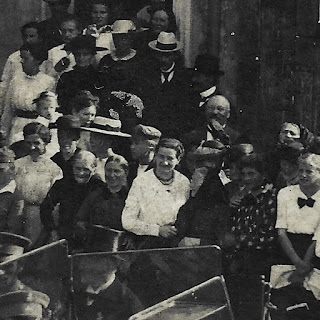 fits quite well with the portraits we have of Auguste at that time. So unless somebody can prove me wrong, I'll just assume that's her in the picture and this is the reason why she treasured this otherwise not very presentable postcard.

I may be wrong of course, but it's just such a satisfying solution to a question that has troubled me for years - I'll just cling to it.