When Covid-19 hit, I gave it another go with prosepluspassion, and even moved my daily science news there, but since the beginning of this year I noticed that people were disappearing at an alarming rate. Now I know why - tumblr closed my account without warning. I can't be bothered to start over again, so will look out for alternatives. Maybe Pinterest - I notice they haven't been bought up by facebook yet.

While I am still keeping my facebook account, I am not prepared to sign up for Instagram while it is under their rule (on this issue see this comment by Cory Doctorow). But otherwise I'm open to suggestions. Does anybody use Mastodon these days? Pillowfort? (suggestions of non-censoring sites I found here). 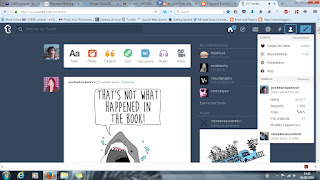 Happy days - a screenshot taken in anticipation of the 2000th follower. Never had quite as many on any other platform.

Some of my tumblr content rescued to 2mblr just after the ban is still online here, surprisingly. There is also a 2mblr backup of StreetMusicOxford. As far as I know, 2mblr never functioned as a live social network though. I can "follow" people and look at their blogs, but there's no timeline and I haven't seen anything more recent than May 2019. Finding people to follow is a bit tricky, but each time I open the search page I get a different set of 12 suggestions, so that's a start.

What is really weird though is that when I go to one of my posts which include content I uploaded to tumblr (as opposed to the more numerous ones just reblogged as they were swilling around), and click on image link, I get a tumblr link to my image and that still works. So tumblr haven't deleted my stuff they're just hiding it. Naughty people.