changes at the top

High mountain lakes, streams and glaciers are often seen as the ultimate natural environments untouched by human devastation, but climate change and tourism are already changing that situation. The remoteness of those mountain sites means that we don't see the change when it happens, but there are multiple knock-on effects such as the spread of pathogens and the disruption of freshwater supplies that will fall back on us eventually.

Starting from a hint to a paper about problems with mountain lakes I extended my scope to include mountain streams an glaciers as well and found the overall picture rather worrying. 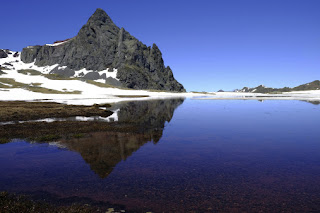 Mountain lakes such as this one in the Pyrenees, although remote from cities and industries, are also exposed to chemical pollution. (Photo: Witizia/Pixabay.)