Every picture tells a story No. 38

Let's move on from Peter Eberle's three daughters to his three sisters. They were Anna Barbara, Barbara Katharina (Babette) and Elisabeth Christina (Dina), born 1893, 1895, and 1897 respectively. Peter, born 1900 was the last of the children of the bakery family at Lorsch.

I don't have a picture with all children, so this portrait of Babette and Dina will have to do. 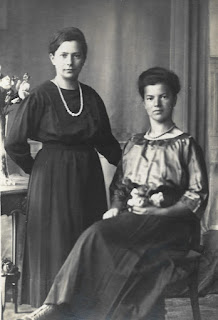 There's one child in the photo of the family house and bakery, which may or may not be Anna. All children had to work for the business at one point, eg making deliveries. The baker died in 1938, his wife in 1934, but the three daughters kept the house in Lorsch for another four decades, so it stayed in the family for more than 80 years.

In her adult life, Anna worked as a nurse at a hospital in Hanau, and when that hospital became Nazi-fied, she moved closer to home to work as a Gemeindeschwester (kind of a peripatetic nurse / health visitor) at Bensheim.

Dina did an apprenticeship complete with Gesellenprüfung as a seamstress / tailor.

I think Babette ran the household. All three of them shared a reputation as the fiercest penny-pinchers that ever lived.

Various reasons have been cited for their persistent singledom. As protestants in the very catholic town of Lorsch, they were facing a barrier (although not an insurmountable one); lack of funds for a dowry; as well as the fact that the young men of their generation were the cannon fodder of WW1, so they would have had to put in some extra effort. Not sure how hard they tried and how much ambition they had in that direction.

And for comparison, let's throw 16-year-old Peter in the mix too. 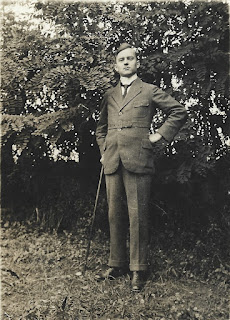