Oxford has a few lovely new low-traffic neighbourhoods, essentially closing down rat runs between main roads with modal filters (see my photos of last year's LTNs on flickr). The furious responses amplified by local media and vandalism from some parts demonstrate that people still don't understand the basic science of traffic management in cities, such as the proven fact that building more roads and more parking spaces will produce more traffic. This is called induced demand, essentially, make it easier to drive and more people will drive more. Conversely, you can make it harder to drive, people will think twice if their trip is necessary or could perhaps be done by walking or cycling.

I learned this more than 30 years ago, back in Germany, in a talk held by Hermann Knoflacher, who was then still active in traffic planning in Vienna, and also widely known as an expert on getting cars out of cities. Another thing I remember from his talk is the concept of desire lines, telling planners where people want to go.

Wikipedia reminded me of another thing he probably showed on his slides, namely his "walkmobile" - a home-built frame the size of a car, with which he sometimes walked around to demonstrate the insane space requirements of drivers. This set me thinking, and I came up with a somewhat more practical version of the idea, using a pedal car to take up space (such as the roadside space outside my house where I really don't want to see horrid huge SUVs), and maybe cycle around to slow down traffic and raise awareness for good causes (such as ban SUVs from cities).

A quick search found a lovely specimen from a company in the US, called International Surrey Company: 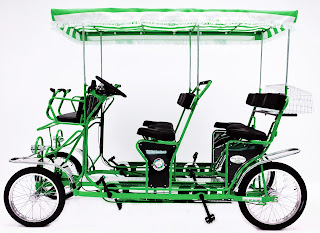 Still have to find something closer to home - stop press here is a list. And figure out how to get a parking permit for something that isn't a car.

An alternative idea which I pondered earlier was converting an old truck into a mini-park, like Adam Tranter did. Just shying away from all the hassle associated with owning the vehicle.