I'm not particularly interested in the Titanic, but spotted this book at a remainder sale and saw the interesting premise: two distantly related men named Ryerson were on the ship when it sank, one being one of the richest passengers on board, the other working as a steward - hence the title.

Presented with this lead, I would probably have written a very big book, starting with the point where the two lineages diverge, and using the Titanic bringing them back together (at least in space) as the apex of a complex storyline.

Phyllis Ryerse, a distant relative of both and chronicler of the Ryerson family history, hasn't written that big story yet, only the key chapter on the Titanic, with maybe 60 pages of text, including short glimpses at the before and after. Basically her story begins a week before the Titanic sank. Her book has 124 pages and half seem to be photos and documents, not all of them terribly interesting. The text reads well and has lots of intriguing detail, so I'd really love to read the 10 chapters before that too. 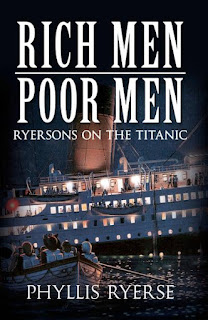 PS It turns out that Ryerson relatives were involved in two other shipping disasters, about which she has written books too, namely the Lusitania (1915) and the Ercolano (1854). Details here. For comparison, I only know of one shipping disaster in which a member of my very extended family was involved, namely the fire on the Volturno (1913).