Heinrich Nagel, the station master of Minden-Stadt, stayed at Minden all his life, so pictures of him are likely to have been taken there, unless he went on any holidays that I'm unaware of. It's not always obvious who's in the pictures though. Two examples that are mystifying me are this one taken outside his house in Fischerallee 13 (that's the house with the missing corner) with his daughter Frieda and Frieda's oldest daughter (right), around mid 1930s, judging by her age, but who are the other people? 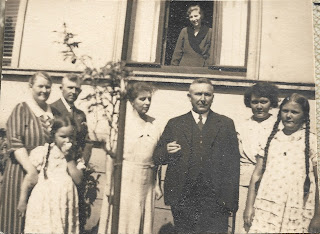 Far left could be Heinrich's second wife Mimi (born Wilhelmine Franke), see this older version of her in comparison, in which case the child could be Frieda's second daughter. In this case the man could be Mimi's brother Hermann who emigrated to the US at some point, and the women in the middle could be his wife and/or their sister. I'm wildly speculating here. Alternatively, they could be neighbours living in the other flats of Fischerallee 13, especially for the woman looking out of the window this would be a plausible explanation. More puzzling still, Frieda had this photo glued into the back of her passport, alongside a family portrait with her husband and young daughters, so it seems to have carried importance for her, and this may argue in favour of the interpretation that everybody is family of some sort.

In the second mysterious gathering, we have Heinrich on the left, probably, although blurred, Frieda on the right, but I have no idea who the other two may be. 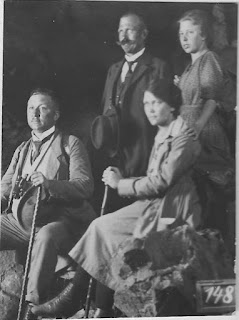 Heinrich's hiking outfit appears to suggest some kind of holiday situation, maybe the kind of visit / trail where a photographer takes a portrait of everybody at the end and tries to sell them at exaggerated price? The number seems to suggest someone played the system and just took a photo of the display photo.