We've met Carl Düsselmann, who was one of the 13 siblings in the Krefeld Clan. We don't have photos of many of his brothers and sisters, but we do have this one of his brother August: 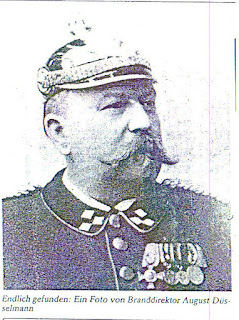 The story behind it and the reason we found it in an old newspaper is that August was a volunteer firefighter at Krefeld, and happened to be the leader of the local fire brigade in 1890, when it decided to become a professional force. So August became the founding Branddirektor of the Berufsfeuerwehr (professional fire brigade), and at one point the brigade put up portraits of its past directors and realised the first one was missing. They published an appeal in a local paper and it turned out that our shared relatives in nearby Neukirchen-Vluyn (I think I met them once as a child) had a photo of old August which they donated to the fire service, and it was duly reported and shown in the paper in 1987. A happy ending for all.

August is also the father of Walter Düsselmann who survived the sinking of the Volturno and later smuggled arms for the Easter Rising. Let's say that carriers of the Düsselmann Y chromosome, including our old Julius, appear to have been happy to embrace risky endeavours. (The medals that both August and Carl are wearing in their photos seem to be pointing in that direction too, although I have no idea what they mean specifically. They probably have a story or two to tell, all hints appreciated.)