I didn’t think that this studio portrait of a young couple taken at Strasbourg (then Straßburg and a showcase development of the German Empire) was telling much of a story, but clearly I wasn’t listening to it the right way. 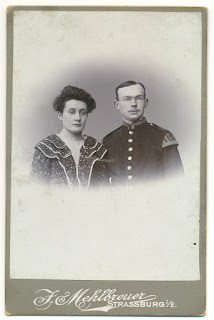 Photo by Photo F. Mehlbreuer, Strassburg i/E., Moerschhauserstr. 29
(the street address not given on our photo but on others you can find online when you search Mehlbreuer).

Now I discovered a booklet containing more than 150 very romantic poems written by him (our cellist Heinrich) after he fell madly in love with her (his future wife Maria) within a year, starting on November 18, 1903, the date when he clearly went batshit crazy for her. The poems are in old-style German handwriting but reasonably straightforward to read. The only thing that’s slowing me down in my transcription efforts is that there is only so much emotional intensity I can cope with in a given day (think Eternal flame times 150), so it may take me a month to get through all of them.

As a reference point, Rainer Maria Rilke only published his Stundenbuch collection of poems, the one that made him famous, in 1905. So, at the time of writing, Heinrich wouldn't have known of Rilke, and this really boggles my mind.

The poems themselves contain very little reference to the real world, which is mainly mentioned as a place to be avoided, because the cloud 9 that the young lovers inhabit is so much nicer. However, the dates and a few place names are interesting. So, chronologically:

18.11.1903 Poor old Heinrich goes completely crazy for her, several poems including one consisting of “3 love songs” are referenced as being written in memory of that date. Christmas 1903 seems to have been significant too, see the dedication on the front page: 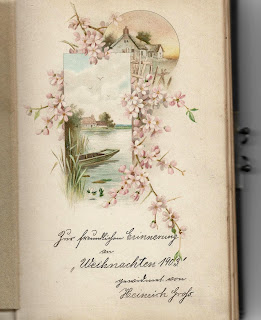 18.4.1904 On Maria’s 23rd birthday, he proposes to her at the Orangerie Strasbourg (today the European Parliament stands next door to this park). One poem, To the bride, carries this date and an earlier one, so I assume it was used in the process. Another poem written a few days later looks back on the big day. And she did say yes, phew. We assume that the studio portrait of the couple was taken on the occasion of the engagement.

The vintage postcard site I usually consult on these issues has quite a few cards of the Orangerie, here's one example from 1905, showing the main restaurant: I might have to do a #lostcities entry on this some other time.

31.5.1904 A farewell has to be said for a few weeks spent apart, and this happened at Schwendistr. 6. Now this is really interesting because the address (in one of the small side roads leading directly to the barracks where Heinrich was stationed, today Rue Schwendi still) has an archi-wiki entry, so you can read all about the construction history of the house (from 1887-88) and look at the photos. Very lovely house it is too. 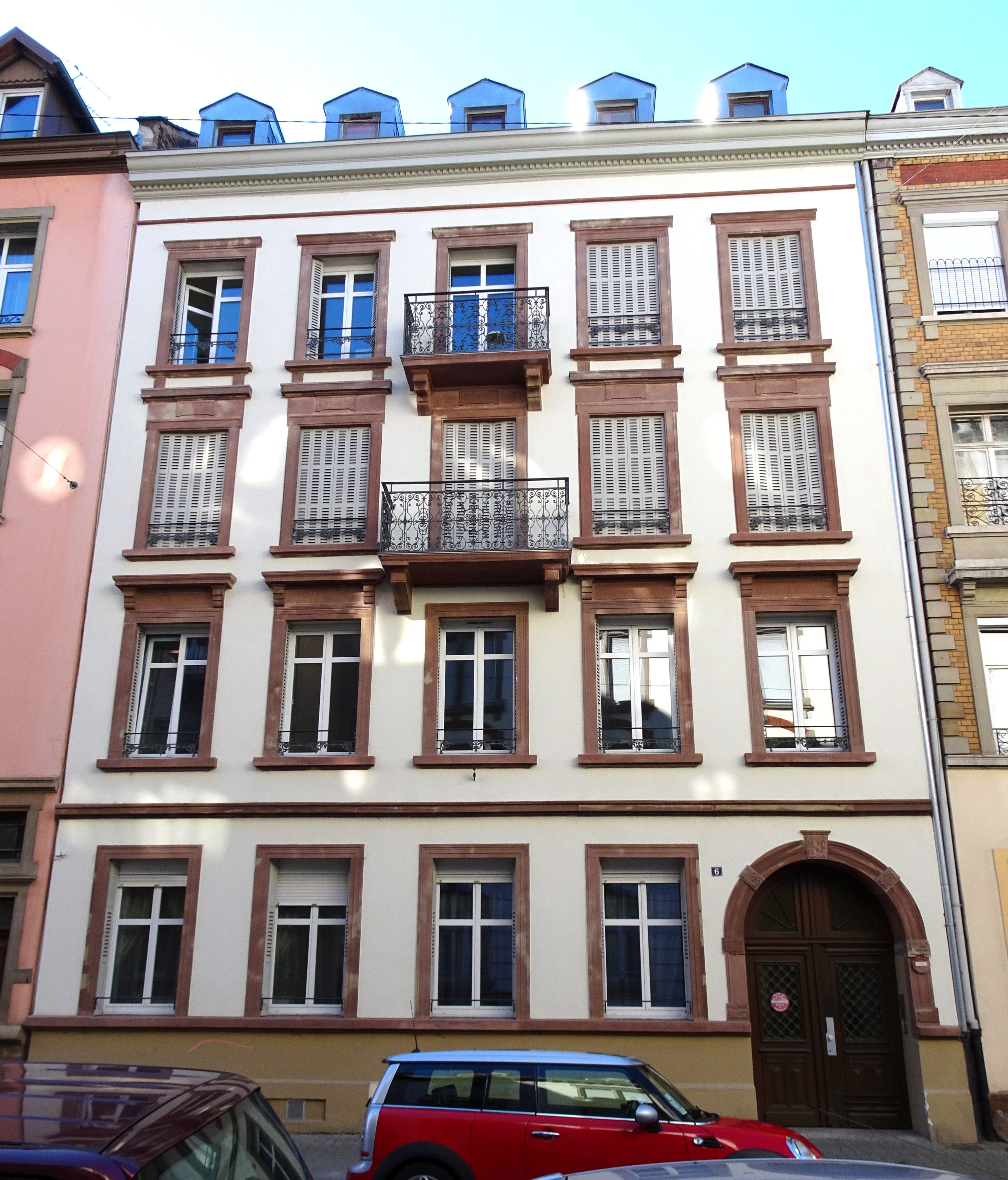 I can’t find any evidence that it has ever been a café or similar place where they might have met. The archi-wiki mentions a painter-decorator’s workshop, possibly in the back building. Conceivably, Maria could have lodged at the address, although we also have another address for her on an undated postcard (also containing a poem), this time it’s Steinstr. 54 (today Rue du Faubourg de Pierre, next to Impasse de Louveteau). As she spent six years at Strasbourg, she may well have lived at both addresses at different times. Notably, both addresses are much closer to Heinrich's barracks than to the hospital where Maria worked with Professor Ledderhose.

All this made for a substantial addition (2,000 words) to chapter 1 of my biography of Heinrich the cello - search "orangerie" to find the new section, which also contains some of the poems in full. A few small adjustments were also necessary in the sections before and after the new one. And I'll look at this photo with different eyes from now on.

PS This entry is based on transcribing something like a dozen poems as well as all titles, dates and places. As I am now working through the whole thing (more than 16,000 words according to my current estimate), a few other topics are emerging, which I'll discuss in separate entries. And I think some further expansion of the chapter will also become necessary, as I am getting to know young Heinrich so much better.

Update 6.11.2022: I have now transcribed everything and done a new blog entry on the content of the poems, which also contains links to PDFs of both the scans and my transcriptions. Have also finished the expansion of the book chapter.

The twitter thread for season 1 is still here. It only loads 30 tweets at first, so you have to click "show more" a couple of times to get all 40 entries.