Here's another newspaper story. When Peter the customs officer was at Aachen, he led an operation that resulted in the confiscation of a truck full of smuggled coffee from Brazil, 50 Zentner (hundredweight) of the stuff, that's 2,500 kg in new money. I do drink a lot of coffee, but that delivery should last a while!

The newspaper obviously didn't name him nor show his picture to protect him from any revenge attacks from the interested parties, but we have correspondence from the newspaper, which sent him prints of the photos they made and stating clearly that he led it.

What the smugglers did was not so much hiding the stuff but using an armoured vehicle to force their way through border control and escape at speed. Only that in this case the customs people had a faster car and caught them. It all sounds quite dramatic.

Here are the photos of the armoured lorry: 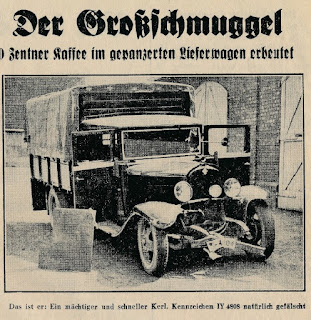 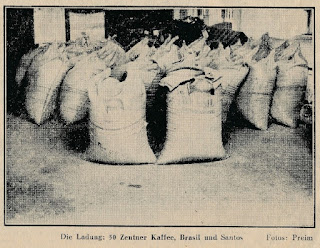 I wonder what happened to all that coffee.