The death cult that is the populist right is beginning to clamour for an end to the UK's restrictions (it's hardly a lockdown as people around here go out and about as they please), so let's check the maths, shall we?

In the last seven days (18.-25.4.) the UK's hospital deaths went up by 4855, that's 694 per day, roughly 700. I don't trust that figure as it may well be capped by test availability and hospital availability, i.e. more people have died but haven't been tested, and/or didn't get hospital treatment when they needed it, but sadly it's the best figure we have available. So what does it tell us?

Assuming around 1% mortality and 3 weeks from infection to reported death, this tells us that around the 1st of April, 70,000 people caught the disease every freaking day. This figure is hopefully going down as long as we keep that r value below 1, but if you look at all the lovely data from lots of different countries on the Financial Times analysis page, it is typically going down very slowly. Part of the reason being that even without going out, the people unaware that they're infected will still pass it on to eg one other person in their immediate sphere, hence the r values of just below one that have been reported eg in Germany.

So if we're very lucky, and this is just a guess based on the FT curve for Italy's recovery, the rate of new infections has gone down by half this month, so we might see 35,000 new infections daily around now. With the restrictions in place. As authorities are failing to get tests up to 20,000 people per day, there is no way we could keep the spread contained if we start from this level.

Give it another month, and we might be at 17,000, and by then the govt. may have figured out the logistics and the science of testing people and chasing up their contacts, and test them too, so my guess would be, if handled well (what are the chances of that happening?), the UK could ease restrictions and return to test and trace approach at the end of May.

Obviously, if the deatheaters win the argument and lift restrictions now, we're back on the old exponential with an r significantly greater than 1, so it will be six-figure death counts and/or another lengthy lockdown.

Takehome message: As the fall in cases is much slower than the rise, every day lost in doing something may cost a week more spent in lockdown. Same is true for every day coming out of lockdown when we don't really have the ways and means of keeping the spread under control. 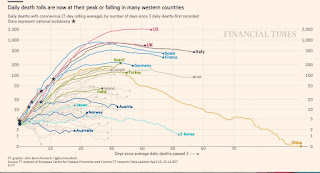 Daily deaths smoothed out over 7-day window, screenshot grabbed from the Financial Times today. (The page changes daily while keeping the same URL, so there isn't any other way of referencing a specific dataset, other than screenshot and paste, I'm afraid.)


PS from the day (12. or 13.3.) when I heard one of the govt. science guys mention herd immunity and realised they were attempting to drive us over a cliff, I had the suspicion that Dominic Cummings was hiding behind a curtain and telling them what to say. Yes scientists disagree on details and the best strategy, but that idea, which would easily lead to 400k unavoidable deaths, plus a malus of those produced by capacity overload, was so illiterate it could only come from the delusional brains of Cummings and kind of deatheaters he's trying to promote. This weekend, revelations from the Guardian, based on several whistleblowing members of the Sage advisory committee, have confirmed my suspicion that DC was indeed an active participant in Sage meetings.