My first article about the dangers of antibiotics resistance came out in September 1994, so I am getting a little bit frustrated that this problem hasn't been fixed in the last 27 years. We are now reaching a point where a post-antibiotic age, meaning widespread incurable bacterial infections wiping years off our life expectancy, is a very real possibility. While I was writing this feature, I needed a course of antibiotics myself, which very nicely focused my mind on what a post-antibiotic world might be like.

The only thing that cheered me up was finding that all the recent work I discussed is based on the premise that we need to find a fundamental new way out of the race we've been running against the evolution and spread of resistance genes. Basically, bacteria have been dealing with fungal antibiotics for hundreds of millions of years. Thus, thinking that we might overcome them with slightly different antibiotics was always naive. So if we want to win this, we need to find evolution-proof recipes.

My feature on the latest advances in this quest is out now:

How to avoid a post-antibiotic age 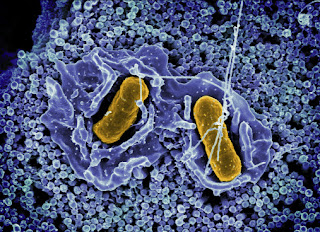