Every picture tells a story, No. 16

Frieda the pianist from episode 7 met a violinist called Paul during her studies at Bückeburg, but somehow that didn't work out. Instead she found love closer to home. Her parents (Heinrich the station master and Luise the railway worker's daughter) had taken up a lodger in their flat overhanging the narrow gauge railway line at the station Minden Stadt. That lodger was a budding customs officer, and he introduced Frieda to his colleague, Peter Eberle (son of the baker Adam Eberle).

Peter and Frieda married in 1924, but still stayed with her parents in the flat overhanging the tracks (I do love that house!), had their first daughter the next year, then their own flat in 1926, but soon moved on to Peter's first proper customs role on an actual border, namely on the Dutch border at Gronau, where they stayed until the end of 1932 and had their second daughter.

I'm going on about this, because it dates the photo shown below, about which I wouldn't have known anything otherwise. You can see a car with the "NL" plate, so it must have been on the Dutch border, ie between 1927(ish) and 1932. The checkpoint was called Glaner Brücke, referring to a very small bridge across a brook which marks the border. Altes Zollhaus (old customs office) was where they lived, except for a period when they were moved to the Dutch side of the border, a move immortalised in the fact that, in December 1929, their second daughter was born at Lonneker (just north of Enschede, with which it was merged in 1934). 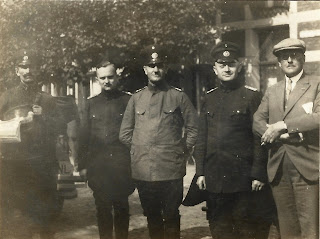 Peter is the second guy from the left, the only one not wearing a hat, for whatever reason. I have no idea who the other guys are and I'm no good at reading their clothes, so all hints appreciated.

This was as much as I knew until I started preparing this entry. Then I felt obliged to google the name of the border post and it turns out there is a flickr account that has an album with 114 photos of this border crossing from 1900 to this century (mostly from the Dutch side, where it's called glanerbrug). I'm still recovering from the shock.

The building we see in the background of our group photo, with the characteristic white stripes running both horizontally and also vertically on either sides of the windows, is recognisable in this lovely postcard from 1950: 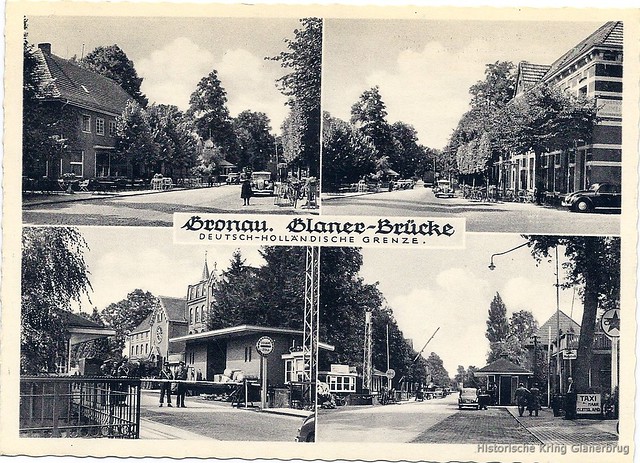 The photos from the 1920s show trams as well as dense rows of mature trees lining both sides of the narrower road. In most views the buildings are obscured by the trees. Then the cars came and ate both the trams and the trees. In the most recent photos you mainly see cars.

After Gronau came a move to Hamm as well as, obviously, the Nazi takeover, but we'll get to that some other time.