Every picture tells a story No. 17

Shortly after Peter the customs officer and Frieda the pianist had moved to Gronau, Frieda's mother, Luise, died from a tooth infection, aged only 48. Luise's mother died just two weeks after her, aged 75, for unknown reasons. In letters written around mother's day many years later, Frieda revealed that she never quite got over this early loss of her loving mother. Frieda was 25 at the time and had only recently moved out of the parental house by the railway tracks.

We don't have testimony from Frieda's widowed father, Heinrich (the station master at Minden Stadt), but just under two years after his loss he married Wilhelmine (Mimi) who was also widowed and I recently learned that she also lost children, not sure about the details. Her full name was Sophie Friederike Wilhelmine Franke (verw. Poggenklaas), so Franke was her birth name and Poggenklaas that of her first husband. Mimi was universally popular with all Heinrich's grandchildren and great-grandchildren and survived into the early 1970s. I don't have any data about her, but Frieda mentioned in a letter, using Mimi as a reference age, that Helene Kauer was about Mimi's age, and Helene was born September 1885. That would make Mimi around six years younger than Heinrich, and at the time of their marriage she would have been 45.

In line with the all round good-hearted personality attributed to Mimi, Heinrich and Mimi always look kind of quietly contented on their portraits, several of which were taken over the years at the railway properties Fischerallee 13 and later Fischerallee 11A. 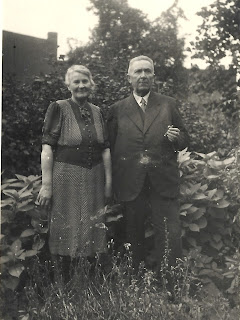 The photo was marked as ca. 1950, which is also the time when they moved from No. 13 to No. 11A, so I'm not sure which garden this is. I've shared photos of both properties here.

I inherited the bible with which Heinrich and Mimi got married, which is a very beautiful one, but also got used, as she did leave various leaves from a day-by-day desk calendar between the pages, presumably looking up the context of whatever biblical wisdom the calendar makers had presented her with on that day. At the moment I can only find three of them, with the most recent dating from 1.3.1973. The date and place of the wedding in church marked in the bible is Uchte, 4.4.1930. 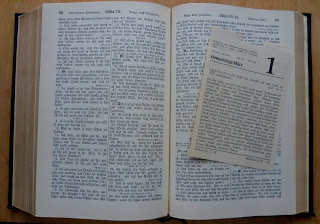 Sample page of the bible and sample calendar leaf.