Every picture tells a story, No. 18

The five daughters of the station master of Adamsweiler all lived to a respectable age and had a tendency to regroup on family occasions so we have portraits of the quintet spanning half a century.

This one is the most recent I have, dated 1950, so presumably from Auguste's golden wedding celebrations. The place is Bad Münster am Stein, where Auguste lived with her husband who had worked at the post office. 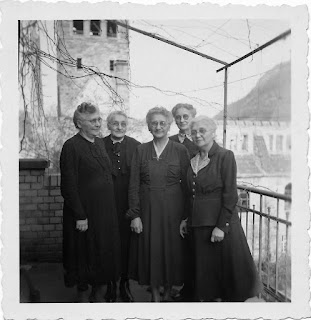 A few decades earlier, the five of them with their mother on her 80th birthday in 1927 (the station master had died in 1909): 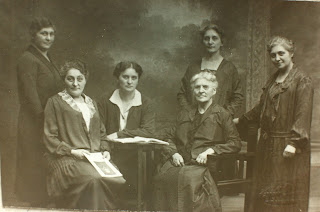 And then the classic 1900 family portrait outside the Adamsweiler station (which I've used in the master post on railway families): 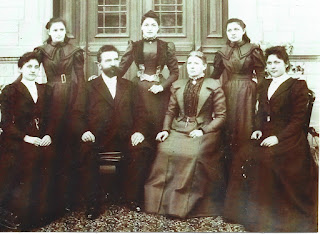 In this one we have from left to right: Helene, Kätha, Johanna, Auguste, Anna. Good luck working out who's who in the other two. Their descendants are listed in the entry about the Kauer clan. (Quick cross-references to my branch of the tree: Helene married her cousin Julius, their first child was Ruth. I will have to reconnect with Johanna later in the series because she built the house that has preserved the bulk of our memorabilia.)

So much sh*t happened in the first half of the 20th century, thinking of the 250 years of life experience accrued between the first photo and the last just boggles my mind. Note also that their parents' magical recipe for long life did not work for boys: both their brothers died before reaching school age.