the case of the missing grandmother

Every picture tells a story, No. 15

Staying in East Prussia, here's another mystery that needs solving. Auguste Adschuck, born around 1865, died in January 1945 in the turbulences at the end of World War II, somewhere between East Prussia and the river Oder, so in today's Poland. The first version I heard was that after visiting family in the West she was trying to get back home to East Prussia. Written notes from one of her grandchildren now suggest she was fleeing from East Prussia to the West, which makes more sense. At a push, both versions could be true if she was attempting to return East and then had to turn around and flee westwards. 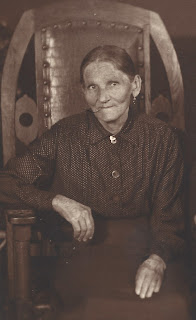 From a family portrait dated 1930.

We have no documentation of her birth, marriage or death, so even the name could be spelled differently. It sounds to me like it may have been a Polish name originally (maybe a longer one like Solodczuk) and there are multiple versions to be found in East Prussia including Odzuk, Odczuk, Otsick, Atschuk, etc. Her husband (Friedrich Kosmowsky) was born in Gerdauen, so for lack of a better clue it makes sense to look there. This website with church records from Kreis Gerdauen has some Adschuck entries, as well as Adschack and other variants, but nothing that could immediately be linked to her.

She had three daughter and five sons. The only two for whom we have birth details were born in 1899 and 1904 in Ernstwalde, Kr. Wehlau (just north of Kr. Gerdauen), so that's another clue. The sons include Friedrich on the fiddle photo (No. 5), as well as Ernst Leopold whose family appears in the photo from which I clipped her portrait. Descendants of her three daughters go by the surnames of Kalippke, Cichy, and Popp. All three surnames turn up in the Gerdauen database, although not necessarily with the specific people we're looking for.